One of the things I’m trying to be better about lately is pulling out boxes and binders and looking at what’s in them instead of just looking at the label and assuming “OK, well, I want to keep that”.  I’m finding that a fair amount of stuff that was untouchable 20-30 years ago now falls into the category of “I don’t know if I’d miss that if it were gone”.

On the other hand, there are plenty of cards that I’m enjoying spending some time with, and that’s what this is about.

Today’s post shares a few cards from my “fun & oddball” binder as well as some of the remainders from one particular sport which I once collected.

This is the back of “Dodgers Top Prospect” Todd Hollandsworth’s card in the 1995 Upper Deck Minor Leagues set…  Look at the colors on this beauty!  It looks like UD might have enhanced the yellow of the outfield wall ad, and it makes that Albuquerque Dukes road uni just pop off the card.  Baseball needs more red and gold uniforms… maybe a certain team in Cleveland should give it some consideration when rebranding. 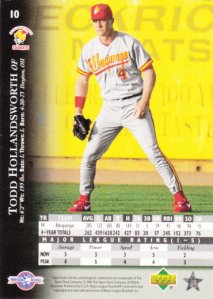 Speaking of prospects, Joe Sondrini was the Pirates’ 39th round draft pick in 1990 and… OK, well he may not have been a huge prospect, and I generally don’t like the 1992 Bowman cards which show players in their street clothes, but I love this particular card.  If you’re looking at this on a small screen, Joe and his bat are hitching their way to Pittsburgh, with a minor league ballpark (anybody know which one?) in the distance beyond the guardrail.

Joe Sondrini played for four years and unfortunately didn’t get higher than the AA Carolina Mudcats.

Do I need to say anything about this 2003 Studio card of Michael Tucker wearing what looks like a blue foam cowboy hat?

I haven’t done this every year, but most years where I make custom cards I will include a card of a player in a… less-than-idea position, like upside down. 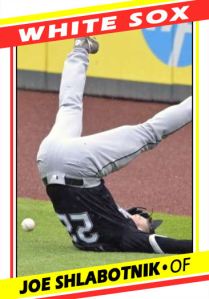 …So imagine my joy when I discovered a 2014 Gypsy Queen insert card that features a photo I would’ve gladly used on one of my customs! The reactions of the fans just adds to the fun of the card. 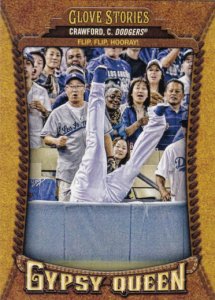 This next card is an interesting mistake which I pulled from a pack of 1997 Fleer back in the day… I don’t know nothin’ from nothin’ when it comes to production of cards, but given that the foil is in the proper place on the card and the image (including the white ‘drop outs’ where the foil should go) are off-center, I’m going to go out on a limb and say the printing process was where the error was introduced. I love miscut cards where the miscut makes the card interesting, and this falls into that category.

This last assortment of cards contains a word which may prompt some to immediately stop reading, but I urge you to stick with it. That word is “NASCAR”.

I was a NASCAR fan during the entirety of the 1990s and collected racing cards from about 1991 to 1994. One thing that I always appreciated about those earlier sets was that the card sets didn’t end with the drivers… they had crew chiefs, engine builders, gas men, jack men, tire changers, broadcasters and Miss Winston, who was at the races for photo ops, trophy ceremonies and the like.

When I got rid of most of my NASCAR collection I hung on to my favorite drivers (primarily Alan Kulwucki and John Andretti) and also maintained a page of Miss Winston cards. I had a bit of a crush on Beth Bruce but I assure you that Sandi Fixx, Marilyn Green and Renee White were in no danger of being donated to Goodwill along with the other NASCAR cards.

It always annoyed me that they cropped that card in the lower left so that the Pro Set Racing logo is smack dab on Beth’s forehead.  You’d think that they could’ve at least “accidentally” reversed the negative so that her head was on the left hand side of the card.

And on the off chance that anyone’s interested, the card in the lower right shows Harry Gant being awarded the trophy for winning the 1991 Goody’s 500 in Martinsville, VA.

OK, that’s enough of that.  I’ll be pulling more binders and sharing more cards in the future (but I’m afraid that’s the extent of my Miss Winston collection).

13 thoughts on “Pulling Out Binders: Fun Cards And “Miss Winston””