I’m a recent convert to those team sets that are sold in retail stores, the kind which are 17 card sets in a little hanger package, and with their own individual numbering.

I ignored these for the longest time because I collect the flagship Mets team sets and I said “Why do I want these cards, I’ve already got cards which are essentially the same!”

Some recent acquisitions have made me change my tune on these, and I’ve decided that I will chase team sets I’ve missed and those going forward.

One of the team sets that are the most fun for a holdout like me is the 2012 Mets team set, which has one card which is unique to that set, and six more which use different photos… I’m going to run through those in this post.

First off, the unique card features Cit Field, the Mets home.  It seems like Topps stopped including ballpark cards at some point, which is kind of a pity.  I’d rather have a header card like this than the “combo card” approach that Topps has used for the past few years. 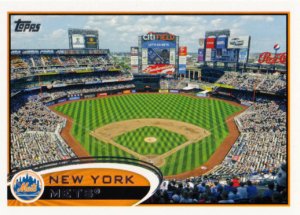 As always, the silver foil text scans as black and gets lost against the black stripe on the “surfboard” part of the 2012 design.

Dillon Gee was a pretty good pitcher for a couple of seasons… these cards saw him coming off of a 13-6 season.  The “regular” Topps card is on the left, the team set card is on the right. 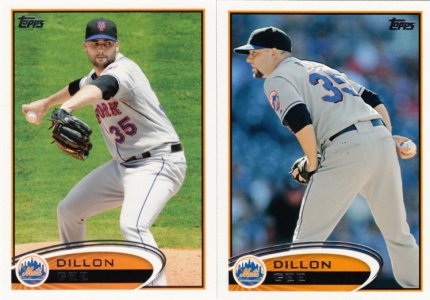 Frank Francisco was the Mets closer in 2012 and had been signed as a free agent the previous December.  I don’t know why they’d go with not-great photoshopped image on the right for the team set. 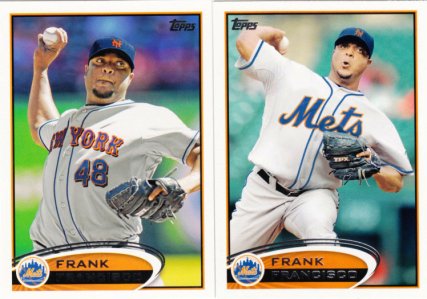 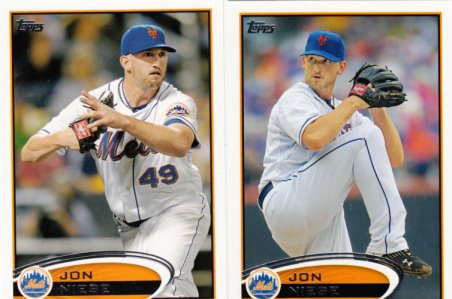 This next pairing almost tripped me up.  At first I thought the team set version of Mike Pelfrey’s card was the same photo with slightly different cropping until I noticed a key difference:  He’s wearing pinstripes in the card on the left, but not in the one on the right! 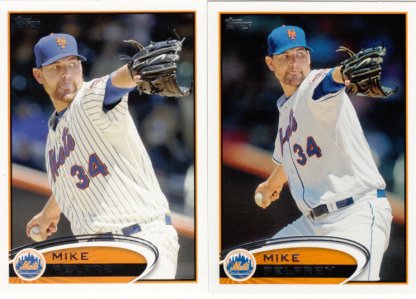 The Mets were still wearing their black alternate jerseys back at this time, much to my dismay.  I know some of the younger fans like them because the team had a notible amount of success when wearing them, but I don’t ask anyone to bring back the 1980s “racing stripe” uniforms just because of the World Champion 1986 team!  By the way, this is shortstop Ruben Tejada. 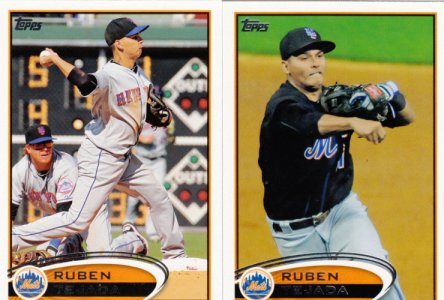 The retail team set photo is a downgrade in my book, although I understand if someone wanted an image with less visual clutter.

Last one is for the recently-retired Daniel Murphy.  If the Mets knew how much he would come back to haunt them, they surely wouldn’t have let him leave as a free agent. 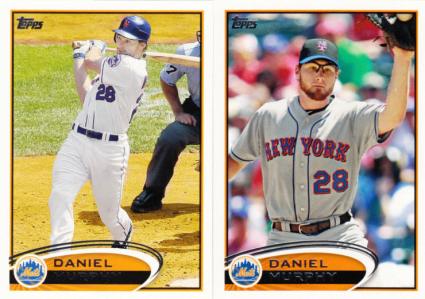 The remaining 10 cards in the retail team set are pretty much the same as the flagship Topps cards, just with different numbering.

I’ll be back with another post featuring the cards from the 2011 and 2016 Mets retail sets.