If you’ve been reading this blog for a while, you’ll know that I’ve been sharing custom cards here since 2012. Each year I’ll have a ‘set’ that I use as an example of what I’d like to pick up when I’m in a certain retailer stocking up on shaving cream and cat litter.

Aside from just enjoying it in general, it’s also become a way for me to relax a bit… I suppose it’s like knitting or coloring books for adults (I don’t like the phrase ‘adult coloring books’ because that sounds like the images are… well… you know)

Last year I had two custom baseball sets and… Well, I’m not even going to count up how many customs I did because I’m not sure I want to know. We’ll just say it was over two hundred, which includes every Met and Oriole who appeared in a game, and also a handful of Curling customs (and that’s the Olympic sport of Curling, I haven’t lost my mind and made customs of Kellogg’s 3-D cards which are curling because they weren’t kept in toploaders… OK, my brain is clearly all over the place this morning).

The direction I’m taking my customs in this year comes mainly from two places:

This project is also going to span two platforms as I’ll be tweeting out a custom card each day (@Shlabotnik_Rpt, if you didn’t know), and then do a summary “pack” here on the blog each week.  I plan on having more in the blog than out on Twitter, but I’m still working out what I’m going to do.

I really want to go into great detail about all of this right now, what went into designing them, how I’m picking out the checklists, what other plans I have for 2021, but I’m going to let my rational side take over and hold stuff back for future posts.  I will tease this much:  This year’s design started out as a riff on a vintage non-baseball Topps set.

I plan on having a specific reason for including any players in this set, but I don’t think you have to rationalize including the reigning American League MVP.  Abreu also lead the Majors with 60 RBI and the American League with 76 hits.

Isiah Kiner-Falefa won a Gold Glove at 3rd base and raised his batting average from .238 to .280 in a similar number of games.

Clayton Kershaw’s career achievements speak for themselves.  As for 2020, he went 6-2 in the regular season and 2-0 in the World Series.  I love the way this custom came out;  with photographers socially distant during games and warmups, there should be more photos like this on cards (real and otherwise) in 2021.

Soak in this Madison Bumgarner custom, because it may be as close as you’ll get to a licensed MadBum card.  He must not have a contract with Topps, as he hasn’t been on a Topps card since 2017.

Alex Verdugo will always carry the Mookie Betts trade around like a monkey on his back, but in 2020 he lead Red Sox with a .308 average and finished 12th in AL MVP voting.  12th isn’t great, but it isn’t nothing.

I still like Jonathan Schoop from his time with the Orioles, which seems a long time ago now.  He’ll be back with the Tigers in 2021, the first time since 2018 that he’ll start the season with the same team for the second year in a row.

Brad Keller went 5-3, 2.47 for a losing Royals team, and is the pride of Flowery Branch, GA.  His one shutout in 2020 tied him with four others for the American League lead. 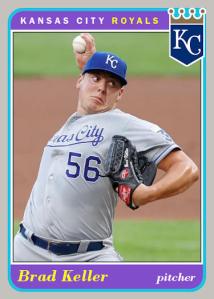 Kenta Maeda was certainly a solid pickup for the Twins, going 6-1 with a 2.70 ERA and leading the Majors with a 0.75 WHIP.  He finished 2nd to Shane Bieber in AL Cy Young Voting. 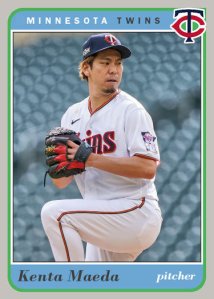 Brian Anderson lead the Marlins with 11 homers and 38 RBI.  The biggest move the Marlins made this offseason was signing Adam Duvall, but they still concern this Mets fan. 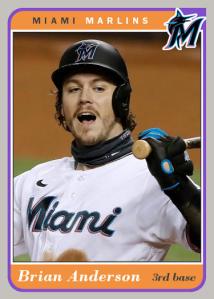 And speaking of the Mets, Jacob deGrom was Jacob deGrom in 2020, making a run at a 3rd straight Cy and leading the NL with 104 K’s. 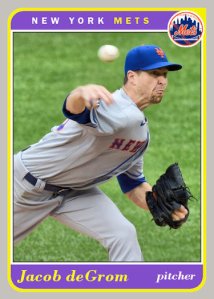 OK, so that’s this week’s “pack” of customs.  We didn’t pull any inserts this time around, but there will be some in future packs.