I’ve been pulling out some of my binders to see whether or not the cards in it “spark any joy”… if they’re worth keeping in binders or keeping at all.  Well, today’s cards most definitely spark joy in me.  All of today’s cards are ones which fall into a binder that doesn’t really have a name, but you could call it my “I just like it” binder or probably more accurately, my “I love this card but I don’t know what else to do with it so I’ll just stick it in this binder” binder.

This first card comes from a 1992 Score insert set called “The Franchise”.  The inserts featured Stan Musial, Carl Yastrzemski and Mickey Mantle.  Now I have been completely over the Mickey Mantle hype for many a year, but I’ve always liked this card. 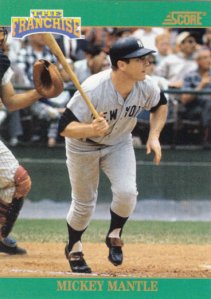 I think what I like about it is that it’s a nice picture, but it’s also a picture of a ballplayer who happens to be Mickey Mantle.  There’s not the usual sun-shining-out-of-his-you-know glorification of Mickey Mantle… Just a nice-looking card of a player who’s just hit the ball.

This next card is interesting especially given that Topps and Sports Illustrated have gotten together to make an on-demand card set featuring SI covers.  This particular card is also of interest to me because I had – or possibly still have? – this 1974 issue of SI… which was fairly unusual for me because I’ve never been a huge SI guy.

This cover is from the 1974 World Series, which pitted the A’s and the Dodgers and was the first time that two California teams faced each other in the Fall Classic.

I was going to say that I’d expect Topps to feature this cover, but I don’t know if they’d want to pay royalties to the 5 players depicted… or 6, if you need to pay to show that one player’s butt.

This 1991 Stadium Club card of Shane Mack is just a beautiful card.  That’s all I have to say about this one.

Kids, back in the early 1990’s when you bought a box of Ultra-Pro 9-pocket sheets, you got a promo card!  This one features Reds’ 1st baseman Hal Morris ready for a game of tennis!

The back of the card proclaims that this card is part of a limited edition of 250,000.  Yep, those were the days.

ProCards minor league cards were on think stock and often cheesy, but you had to love it when they had unusual shots like this one of Joel McKeon with a TV camera

OK, I need to move on with my day. I’ll be back with more cards from this binder at some point.

9 thoughts on “Cards From My “I Just Like It” Binder”