1970’s Highlights:
Manged the Mets to twin 83-win 3rd place finishes in 1970 and 1971; Sadly, today is the 49th anniversary of his death, which came unexpectedly when he suffered a heart attack while golfing with his coaches in Florida before the beginning of the 1972 season

Fun Stuff:
Has received the most Baseball Hall of Fame votes of anyone who is not a HOFer 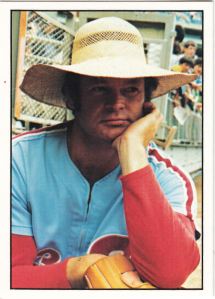 Career Highlights:
Pitched in 493 career games without ever starting; Pitched professionally for 21 years

Card stuff:
I’ll admit it… Hoerner is here mainly because of that SSPC card

Fun Stuff:
Has a .308 postseason batting average, as well as a solo home run in the 1974 World Series… this homer would be the last World Series homer by an American League pitcher in the 20th century

Career Highlights:
Was named the 1981 NLCS MVP after winning games 1 and 3 while keeping the Expos scoreless over 14.2 innings; Was an All-Star in 1981; Earned a 35-3 record while pitching for the University of Texas and set a school career record for ERA; Inducted into the College Baseball Hall of Fame in 2008; Was an All-American from 1969 to 1971

Fun Stuff:
His first career homer was a Grand Slam against the Mets, 9/16/72