When I started out doing my 2021 TSR Daily customs (called “Daily” because I Tweet out a custom each day #2021TSRDaily ), I decided to compile the “checklist” as if I were creating a real set which would represent the best eight-or-so players from each team.

Ever since I decided on that format, I’ve been looking for another way to include the players *I* want to make customs for… and I think I’ve got a new “insert set” which covers that.

…But before we get to that, I want to lead off with a different sort of insert. One thing I’ve been pondering for a year or two is creating some sketch cards which would make use of my modest drawing abilities.

Well, after Joe Musgrove pitched the first no-hitter in San Diego Padres history, I was beaten to the punch.  Phungo Tweeted out a sketch card using my 2021 TSR Daily design as the “canvas”. 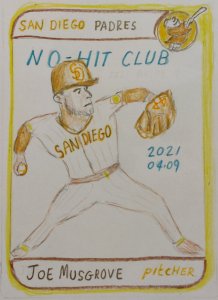 This brought a big smile to my face, both because I liked the sketch card in and of itself, and also in a Sally Field “You like it!  You really like it!” kind of way.  Thank you, Phungo!  I truly appreciate the homage!  (I’ll also throw out a link to his blog).

Christian Walker lead the 2020 D-Backs in doubles was among the team leaders in runs, hits, homers, RBI and Slugging %.  There’s a part of me who’s a bit irritated that the Orioles lost Walker on waivers 4 years ago, but I’ll also admit that the one thing the O’s don’t really need is another first baseman. 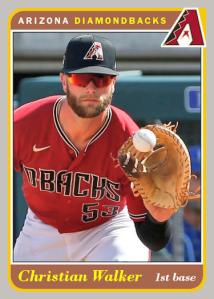 Adam Wainwright has pitched in 16 seasons for the Cardinals, so I’d forgotten that he was originally a 2000 1st round pick of the Braves. I love Wainwright’s socks, so I made sure that they were included when I cropped the image 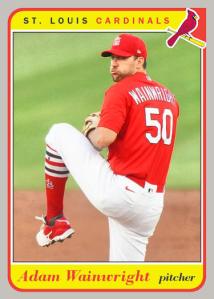 Last week, Brandon Woodruff no-hit the Cubs into the 7th inning but ended up with a no-decision when the Brew Crew won in extra innings.  Woodruff was much sharper in that start than in his first start of the year when he gave up 3 runs in 4 innings. 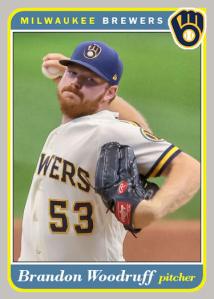 Last year Bryce Harper lead the league in Walks and his 8 stolen bases was tied for 10th with four other players.  What’s funny about this custom is that I was intending to not spend much time on it because “Eh, it’s just Bryce Harper”, but then I ran across this image and said “Oh, well *that’s* a nice shot…” 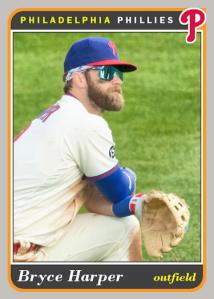 John Means was the Opening Day starter for the O’s and lead the team in K’s in 2020.  Even within the Orioles organization he seemed to come out of nowhere to become the staff ace.  I don’t believe anybody had him pegged as a significant prospect. 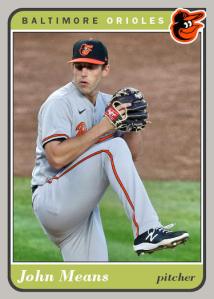 Anthony Rizzo has won three straight Gold Gloves and has been top 5 in HBP every year since since 2014… I discovered this fact yesterday while poking around his Baseball Reference page trying to find something interesting to say about him… and Boy Howdy, that’s pretty interesting 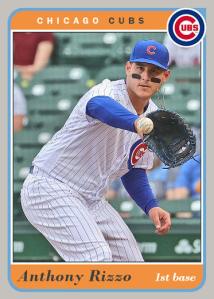 Former 1st round pick Ian Anderson (3rd overall in 2016) pitched as a rookie in the 2020 postseason and came out with a 2-0 record and a 0.96 ERA over 4 starts.  I started semi-collecting him 3 years ago after I stumbled across his Pro Debut card and said “Hey, his name is the same as the frontman from Jethro Tull!” 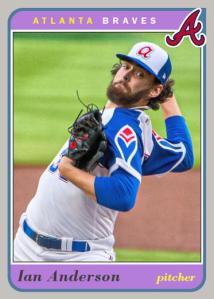 OK, as for that insert set I mentioned at the beginning… I knew what I wanted to do in terms of creating another custom set which would highlight the players I would want to feature in custom cards — I even had a name for it:  “Shlabotnik’s Picks” — but I wasn’t sure how I wanted to go about “invoking” it.

I played around with some already-existing custom templates I had sitting around but hadn’t used much.  One that stuck out to me was for a personal favorite which has its 25th anniversary this year:  1996 Upper Deck Collector’s Choice.  That set’s simple but elegant design is one of my favorites of the 1990s and I put a fair amount of effort into chasing the set back then.

I played around with what I had, but I wasn’t happy with it… and then I hit on the idea of dropping the standard base card version and making a custom using the full-bleed version of the design used for several subsets, and things fell into place. 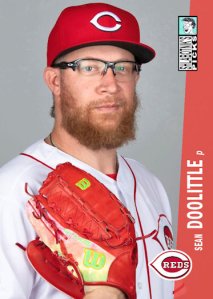 I still need to play with the fonts a bit, but I like the way this is panning out.  It’s hard to tell from the image, but I replaced the “Collector’s Choice” badge with “Shlabotnik’s Picks”, and also swapped out my cartoon face for the UD logo.

I also tried to ‘photoshop’ a ballpark background to replace the studio backdrop, but Doolittle’s beard with it’s undefined edges made it more effort than I wanted to get into.  I’m not unhappy with the results, though.

OK, that’s it for this week’s pack.  Have fun, stay healthy and be excellent to each other!