Career Highlights:
Stole 557 bases in his career; Played in 4 World Series and won a championship with the 1981 Dodgers

Card Stuff:
Was in all five 1970s Hostess sets 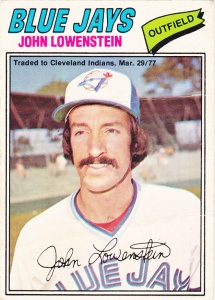 1970’s Highlights:
Was a member of the 1979 Orioles team which beat the Angels in the ALCS but lost to the Pirates in 7 games; Hit a walk-off pinch-hit homer to win Game 1 of the 1979 ALCS; Hit a pinch-hit two-run double in Game 4 of the 1979 World Series; Was obtained by the Blue Jays in a December 1976 trade with the Indians, but was traded back to Cleveland at the end of Spring Training, so he never played for the Jays

Career Highlights:
Won a World Championship with the Orioles in 1983; Was inducted into Orioles Hall of Fame in 2015; Over his career he played every position except for pitcher and catcher

Fun Stuff:
Has played the most Major League games of anyone born in Montana; Majored in Anthropology at UC Riverside

Card Stuff:
His 1977 O-Pee-Chee card shown above features a Spring Training photo and a note about being traded back to Cleveland; His 1978 Burger King Texas Rangers card was an “update” of 1978 Topps, where he was pictured with the Indians

Career Highlights:
Was the first American of Japanese ancestry to play in the Majors… his mother was Japanese, and his father was an American serviceman and he was adopted by a Chinese-Hawaiian family; Was the first Hawaiian to play in the postseason; Was one of just six players ever to pinch hit for Hank Aaron

Fun Stuff:
Was the record holder of games played by anyone born in Hawaii until he was passed earlier this season by Kurt Suzuki; Was a football star in high school and got a football scholarship at Brigham Young; Played a season in Japan for the Taiyo Whales

Card Stuff:
Appeared in every flagship Topps set of the 1970s; Shares a high #’ed 1968 rookie card with Larry Hisle

Career Highlights:
Had four seasons of 100+ RBI; Hit 307 homers over his career; Was a four-time All-Star; Won a World Championship with the 1980 Phillies; Played for the White Sox in the 1983 ALCS

Card Stuff:
Appeared in all five 1970s Hostess sets; His 1977 O-Pee-Chee card does not have the All-Star banner at the bottom (so you can see his knees)