Recently in my 1970s: A-Z series I’ve been making note of those players who appeared in all five Hostess sets of the 1970s.  In the comments of the most recent post, San Jose Fuji wondered how many players are represented in all five sets.

“Good question”, I thought… and here we are.

There are 33 players who are featured in all five Hostess sets.

Thanks for reading, I’ll be back with another post soon!

Oh, right, like I would let an opportunity like this to go by without my over-analyzing what I found by querying my card database. As it turns out, this also gives me an opportunity to show off three Hostess cards I got at the Water Buffalo Lodge show… how fortuitous! 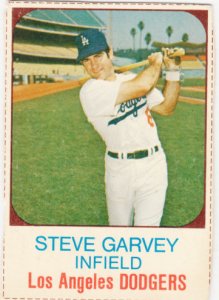 …make sure you’re sitting down…

Some people are outraged that Garvey isn’t in the HOF, but it’s not the only slight of his career. Apparently starting the 1977 All-Star Game, winning a Gold Glove and driving in 115 runs was not sufficient to get Mr. Garvey into the 1978 Hostess set. Go figure.

Before I go any further, let’s take a quick break to show off another Hostess acquisition and then take a step back to look at the big picture. 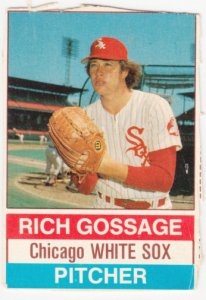 UPDATE:  There are *34* players who are in all five sets… I missed Bobby Grich because one of his Hostess cards was listed as “Bob Grich” in my database, so it didn’t sum up right.  Thanks to Dime Boxes Nick for catching that!

Robin Yount is a fairly surprising member of this list, as his 1975 Hostess card came out the same season as his official rookie card.  “Rookie year” cards don’t often show up in Hostess… for example, George Brett is also well-known for his 1975 rookie card, but didn’t show up in 1975 Hostess (and unlike Yount he got some 1974 Rookie of the Year votes).  Brett appeared in every Hostess set from 1976 to 1979.

Even more surprising on the list of Five-Timers are Mike Hargrove (who was, at least, the 1974 AL ROY) and Rick Reuschel… (FYI, this Reuschel is not one of my new cards) 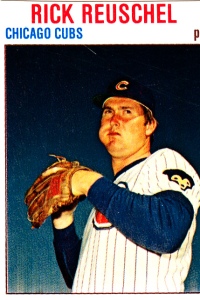 As you might think, there are more players with four cards than there are with five.  I won’t list them all, but there are 42 of them.  Some of the somewhat surprising players who did appear in 4 cards include Freddie Patek, John Candelaria, John Mayberry, Jorge Orta and Willie Montañez.

…and Larry Hisle.  This well-loved example is the last of my new Hostess acquisitions. 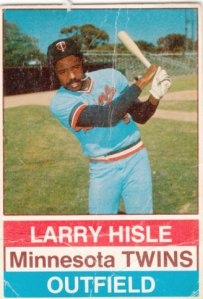 Part of why there might be a weird discrepancy of who gets in the sets and who does not is because Hostess tried to keep each team equally represented, more or less.  Generally speaking there are 5 or 6 cards per team in any given Hostess set, so that might be why 1978 has no Garvey but does have Oakland’s Earl Williams and his 38 RBI.

One thing I discovered, and which is something that isn’t all that surprising, is that there are fewer cards of the Expos and Blue Jays than there are of the other teams.  This makes sense since Hostess snack cakes weren’t sold in Canada.  Yes, the Blue Jays were an expansion team in 1977 and didn’t have much in the way of good players, but they still had about half as many cards as their partners in expansion, the Seattle Mariners.

I’m sure if I put my mind to it I could slice ‘n dice the checklists in a number of other ways, but I think this is enough for now.

8 thoughts on “The Hostess Lowdown”