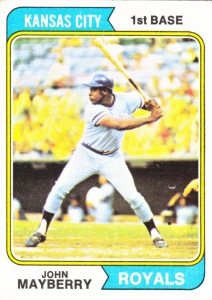 Fun Stuff:
Father of John Mayberry Jr. who played with the Phillies, Blue Jays and Mets from 2009 to 2015

Card Stuff:
Appeared in every flagship Topps set of the 1970s

1970’s Highlights:
Hit his 3000th career hit on 7/18/70; Was the starting All-Star center fielder from 1970 to 1972; Got his final Major League hit in Game 2 of the 1973 World Series, an RBI single off Rollie Fingers in the 12th inning which would put the Mets on top to stay; Was traded back to New York in 1972 when the Giants sent him to the Mets in exchange for pitcher Charlie Williams

Fun Stuff:
Played himself on several episodes of The Donna Reed Show and also on Mr. Belvedere; Is the Godfather of Barry Bonds

Card Stuff:
Was the last player from 1952 Topps to appear in a Topps set as an active player; Makes an “uncredited” appearance in 1974 Topps on the Game 4 card of the 1973 World Series subset 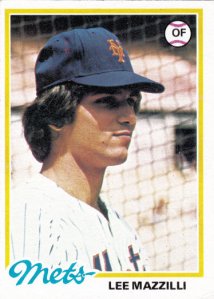 1970’s Highlights:
The Mets 1st overall pick in 1973 and from Brooklyn, he was the starting center fielder in the late 1970s and one of the players a desperate fanbase looked towards (not that I would know anything about *that*…);  A legitimate case can be made that Mazzilli should’ve been the MVP of the 1979 All-Star game… Coming in as a pinch-hitter in the 8th inning, he hit a solo home run off of Jim Kern to tie the game at 6-6, and then in the 9th he drew a bases-loaded base-on-balls off of Ron Guidry to drive in the game’s winning run;

Career Highlights:
In the long term, the biggest impact that Mazzilli had on the Mets was an indirect one… in April, 1982 he was traded to the Rangers for pitching prospects Ron Darling and Walt Terrell (who would later be sent to the Tigers for Howard Johnson); Would manage the Orioles for a year and a half

Fun Stuff:
Before playing pro baseball, Mazzilli was a speed skater who had won several championships;  His son L.J. Mazzilli currently plays for the Long Island Ducks in the Atlantic League 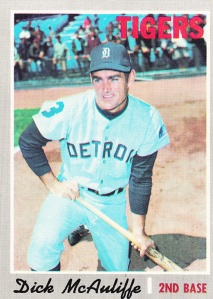 Career Highlights:
Had a .299 career batting average and batted over .300 7 times in 11 seasons; Won a World Championship with the Phillies in In the 1980 World Series he hit a home run in Game 1 and scored the winning run in Game 2