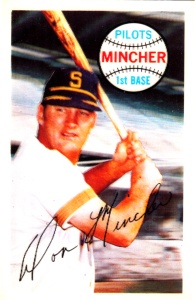 1970’s Highlights:
Lead the 1970 A’s with 27 homers, 4 more than Reggie Jackson; started at 1st base in first ever Rangers game; His last Major League appearance came with the A’s in the 1972 World Series

Career Highlights:
Was an All-Star in 1967 and 1969; Was the Seattle Pilots first pick in the 1968 expansion draft and hit 25 homers for the team; Was the GM of the Huntsville Stars in the 1980s, became a team owner, and eventually became president of the Southern League up through his retirement in 2011

Fun Stuff:
Mincher was the only player to play for the original Senators, the “new” Senators and for he two teams that each team became after moving: The Twins and Senators; Hit a home run in his first World Series at-bat (1965)

Career Highlights:
Was a 7-time All-Star and a 3-time Gold Glove; Finished 2nd to Gil McDougald in 1951 AL Rookie of the Year voting even though he batted .326, scored 112 runs, drove in 76 and lead the league with 14 triples and 31 stolen bases; Lead the AL in hits in 1960, and led the league in stolen bases and triples multiple times during the Fifties; In 1956 he set a White Sox single season mark with 23 HBP and also holds the team’s career mark with 145 HBP

Card Stuff:
Before appearing in the 1977 Topps “Record Breakers” subset, his last major baseball card was in 1964 Topps

1970’s Highlights:
I’ll admit; Minton’s success came largely in the 1980s, but he’s included here mainly for his infamous 1978 card which used a colorized black and white photo; Prior to this card, he’d pitched in just 16 Major League games, only two of which were in 1977

Fun Stuff:
A shortstop with a live arm in high school, he’d never pitched before being drafted by the Royals, who converted him during his first instructional league; Got a reputation as a flake for stunts like stealing the team bus 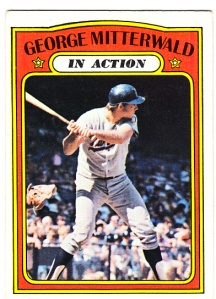 1970’s Highlights:
Starting catcher for the Twins in three seasons; In his 5th game with the Cubs (after a December 1973 trade) he went 4-for-4 with a walk, double, three home runs (one a grand slam) and 8 RBI… A Cubs catcher would not have 3 homers again until Dioner Navarro in 2013; Went 4-for-8 with 2 runs and 2 RBI against the Orioles in the 1970 ALCS; On 9/3/71 he hit a walk-off homer off of eventual Cy Young winner Vida Blue to give the Twins a 2-1 win over Oakland

Card Stuff:
His first two card, both “Rookie Stars” cards, had to shorten his first name to “GEO.” to get his name to fit