This morning I Tweeted the last of my 2021 TSR Daily custom cards (called “Daily” because I Tweet out a custom each day #2021TSRDaily ).

I started Tweeting these on February 23rd and sharing them here on March 1st.  Back in 2020 with everything shut down, I created a couple of hundred customs as a way to keep me occupied and relaxed.  For 2021 I decided that if I was going to crank out that many I might as well make a small cohesive set and try to represent all of the teams.  I’m going to share the last batch of customs and then I’ll discuss how well I met my goals and what is coming next for me. 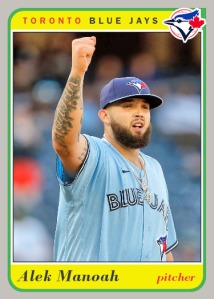 One of the things I tried to do late in the game was make sure that I made a custom for anyone who might win an award or be a league leader in some major category (i.e. I didn’t sweat the Hit By Pitch leaders). I don’t think Manoah is going to be the AL Rookie of the Year, but I expect he’ll get some consideration.

Lucas Giolito has gotten Cy Young votes in the past and threw a no-hitter last year. This year he has 11 wins and 201 strikeouts. 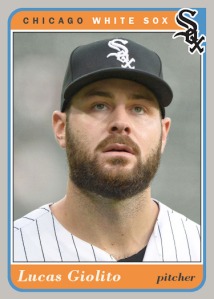 During the month of August Shane McClanahan won each of his five starts. One other thing I found out, and I don’t know why this surprised me as much as it did, but he’s just the second McClanahan to appear in the Majors… the first was Pete McClanahan who played in 7 games for the 1931 Pirates. 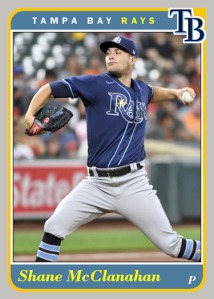 Quick side note about Pete McClanahan: He’s a “reverse Moonlight Graham” in that he played in 7 games without ever taking the field. He pinch hit 6 times and pinch ran once. For his abbreviated career he went 2-for-4 with 2 walks and 2 runs scored. The 1931 Pirates were a mediocre team, it makes me wonder why a guy with a .667 on-base % didn’t get more of a shot… but there’s very little information about Pete out there.

Getting back on track…

Rookie starter Luis Garcia is one of four Astros starters with double-digit wins, and he averaged 9.7 Ks per 9 innings pitched. 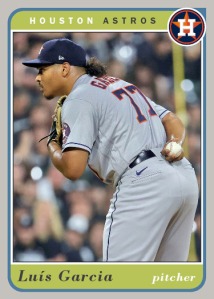 The Braves’ Will Smith lead the NL with 60 games finished and he’s 3rd in the league with 37 saves. 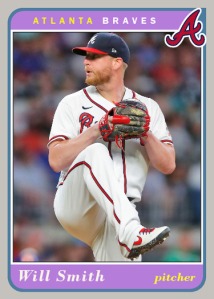 Garrett Whitlock was selected from the Yankees farm system in last winter’s Rule V draft… and then he helped end the Yankees’ season by pitching the 9th inning of the Wild Card game. He lead Boston pitchers with a 1.96 ERA and a 1.105 WHIP. 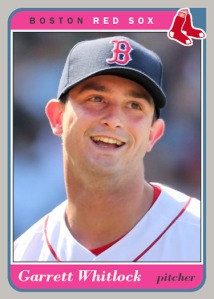 Kenley Jansen’s 38 saves was second-best in the National League. 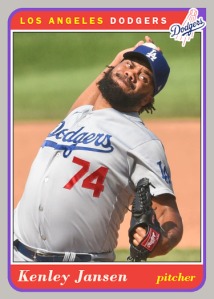 As I mentioned, my original objective is to have each of the 30 teams represented by 8 different players.  I had pretty decent success with that as 22 teams had at least 8 customs.  Eight teams had only 7 customs, but in some cases there wasn’t much I could do about it.  For example, after the Nationals traded off many of their players I tried going forward with a prospect they’d obtained in one of the deals, but ultimately decided that I wouldn’t feel good about anyone I’d select as the 8th Nat.

Early in the process I made sure I included anyone who won an award in 2020, assuming that they were still active and not out for the season.  Later on, I did the opposite, trying to make sure that I didn’t miss anybody who would go on to win an award this year, or lead the league in some category.

I had a lot of fun doing this, I learned a lot about different players along the way, and I plan to do something similar in 2022… but I don’t know that I would do this same exact thing.  It was fun, but it was also a lot of work.

In the meantime I have plans to do some other custom projects coming along.  You’ve seen my hockey customs.  I recently came up with a new design to use for a “Hot Stove” set that will probably kick off whenever the Cardinals, Padres or Mets hire a new manager… and I’ve got some other things in the works.

And here, for those who are curious, are the team checklists for my finished set. Feel free to give me grief about leaving any players out; I’m genuinely interested in your takes on that, but will also invite you to make your own equally-representative checklist and see how much of a challenge it is.