As I mentioned last week, although I finished off my 240 custom “TSR Daily” set, I still intend to keep generating customs, although this time in a more impulsive and less structured way.

We’ll start off with the first of two Seattle Kraken customs…. This one features left wing Jaden Schwartz, who left the Blues to sign a five-year contract with the Kraken

This is going to be a bit awkward going forward… but I’m intending to feature one of the NHL’s Stars of the Week, who are named on Mondays… and I share my customs in this blog on the weekends, so by the time the Stars of the Week show up here, it’s already at the end of the next week… but anyway, the NHL named the LA Kings’ Anze Kopitar as it’s 1st Star of the Week on October 18th after he scored 6 goals and 7 points 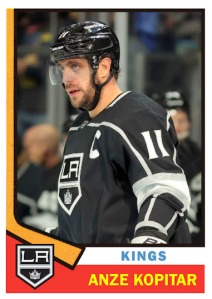 Anthony Santander is a fan-favorite both in Baltimore and in the UK, spurred by a group of 4,000 UK Boy and Girl Scouts who bonded with him at a 2019 O’s game.  I know I said I was done with 2021 TSR Daily, but I still have Orioles and Mets team sets to complete.

Yoshi Tsutsugo was an All-Star in Japan and a standout at the 2017 World Baseball Classic, but he’d largely struggled with the Rays & Dodgers. Things seemed to click for him with the Bucs, I’m hoping he can continue to turn it around.

For anyone who missed these before, this is my “Shlabotnik’s Picks” series which is based on 1996 Upper Deck Collector’s Choice (one of my favorite sets of the 1990s, which makes it, in itselfm a Shlabotnik Pick)

I was very excited when knuckleballer Mickey Jannis made his Major League debut at the age of 33. I’d seen him pitch in the minors, plus the world needs more knuckleballers. He unfortunately pitched in just the one game.

Alex Barre-Boulet won the Stanley Cup with the Lightning earlier this year, was claimed on waivers by the Kraken on 10/11, played two games for Seattle, was put on waivers and was claimed back by Tampa Bay. I couldn’t resist giving his custom a bit of O-Pee-Chee parody

Free on boxes of Shlabotnik’s Snack Cakes: TSR Random, a custom set with a haphazard assortment of all your… well… *my* favorite celebrities and subjects!
A non-sport set is something I regularly toy with, and I’m hoping I can maintain some traction with it this time. The first card is for “Weird Al” Yankovic, who celebrated a birthday yesterday.  I don’t think I could do a non-sport without including Weird Al, since I’ve been a fan of his since…….. Um……… well, a long time. 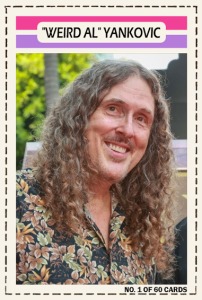 Another Kraken… Jared McCann leads the team with 5 points and has scored goals in three games. 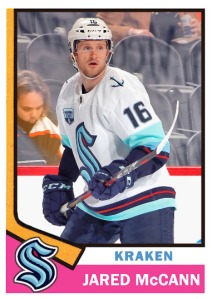 Radical take: I think I like the Kraken road sweater better than the home sweater.