My last COMC shipment contained 15 of cards from the various 1981 Topps/Coca-Cola sets.  If you’re not familiar with the Coke sets, they were a number of regionally-issued team sets that were similar to 1981 Topps.  There were 11 teams included, and each team set was made up of eleven player cards plus one header card.

What makes these cards particularly interesting is that they were created and issued later than the flagship Topps set, so they have some updated cards for players who changed teams during the offseason.  There are also cards which have different photos for a variety of reasons.  For me it’s the ones with different or updated photos that are interesting enough to collect.

I’m going to share my new Coke acquisitions a few at a time, grouped in different categories.  In this post, we’ll be sharing the three players involved in a December 9th, 1980 trade between the Cardinals and Cubs:  HOF reliever Bruce Sutter (who won a Cy Young in 1979), up-and-coming outfielder Leon Durham, and Gold Glove-winning 3rd baseman Ken Reitz.  Sutter went to St. Louis in exchange for Durham, Reitz and a player to be named later (who would end up being 3B Ty Waller, who played 63 games in his MLB career)

We’ll start with the principal of the trade, Bruce Sutter.  Here’s his regular Topps card with a cool photo plus the All-Star banner that you won’t see in the next two cards

And here’s the 1981 Topps Traded card which, as you can see, features an actual Cardinals uniform rather than an airbrushed one 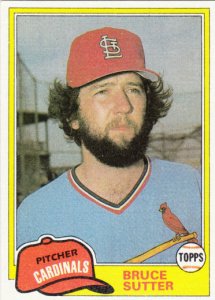 Next up, Leon “Bull” Durham.  1981 Topps, with a small glimpse of the Shea Stadium scoreboard behind him:

1981 Coke:  A serious looking Leon with an airbrushed Cubs helmet.  I would guess that this photo, with the batting helmet and jacket with the popped-up collar, was taken at the same time as the flagship card. 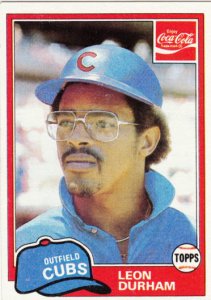 Finally there’s Ken Reitz.  In 1981 Topps he looks like he’s in on the joke

And finally 1981 Traded… after going through the stages of grief over being traded to the last-place Cubs, he’s reached the “acceptance” stage. 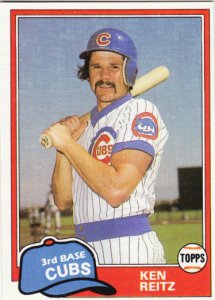 As I mentioned, I’ve got another dozen Coke cards to share, but I want to spread those out

For those who don’t remember the “Have A Coke And A Smile” ad campaign, here’s one of the commercials: