1970’s Highlights:
A prospect in the Dodgers system who was blocked at the Major League level, Royster was traded to Atlanta in a deal that also involved Jim Wynn and Dusty Baker; Was the 3rd baseman on the 1976 Topps All-Star Rookie team

Career Highlights:
Managed the Lotte GIants of the Korea Baseball Organization in 2008, making him the first foreign manager of a KBO team; Was a coach with the Rockies, Brewers and Dodgers

Fun Stuff:
His cousin is former Major League OF/DH Greg Vaughn; His leaping catch at Fulton County Stadium was featured in the credits of “This Week In Baseball” 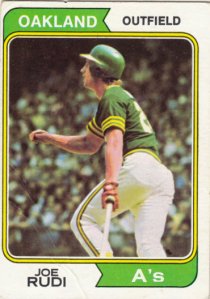 Card Stuff:
Appears in every flagship Topps set of the 1970s; His 1973 Topps card famously features 3 A’s players, none of whom are Joe Rudi

1970’s Highlights:
An All-Star in 1973 and 1976; Originally an outfielder, he didn’t become a shortstop until his 4th Major League season; Part of the Garvey-Lopes-Russell-Cey Dodgers infield which played together from June 1973 to the end of the 1981 season

Career Highlights:
Russell’s 2,181 games is the most of any Los Angeles Dodger; Also holds the Dodgers career record with 106 intentional bases-on-balls; An All-Star in 1980; Has a career .294 postseason batting average; Replaced Tommy Lasorda as Dodgers manager in 1996 and took the team to 2nd place finishes that year and the next before being fired during the 1998 season

Card Stuff:
Appears in every flagship Topps set of the 1970s;  Did not appear in the 1976 SSPC set after missing nearly half of the previous season due to injuries 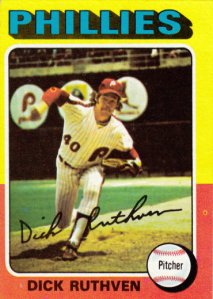 Career Highlights:
Won a World Series with the 1980 Phillies and won a career-high 17 games during that season

Fun Stuff:
Appeared on Family Feud in 1980 as five Phillies took on five players from their World Series opponent KC Royals; His twin sister married fellow Major-Leaguer Tommy Hutton; Was a member of the Chicago White Sox for 2 days in December, 1975 when he was dealt by the Phillies in a trade involving Jim Kaat, and then flipped to the Braves in a trade for Ralph Garr

Card Stuff:
Although many of the players from his two December 1975 trades were featured in the 1976 Topps Traded set, Ruthven was left out