1970’s Highlights:
Had a career year in 1972 with the Royals, batting .300 for the season with career highs in runs (60), RBI (66), doubles (21), triples (4), Homers (8) and hits (135); He was also named to the A.L. All-Star Team; Scheinblum lead the league in batting for most of the season but dropped off at the end and finished 6th; Played 2 seasons in Japan for the Hiroshima Carp and was the first player in NPB history to homer from both sides of the plate in the same game

Fun Stuff:
Scheinblum was the last KC Royal other than George Brett to wear #5; Was the first Jewish switch-hitter to bat .300 for a full season

Card Stuff:
Despite the Topps card shown above, he spent all of 1970 playing with the Indians’ Triple-A team in Wichita

Career Highlights:
Inducted into the Baseball Hall of Fame in 1995; Considered by many to be the best all-around third baseman in history; Was the NL MVP in 1980, 1981 and 1986; Was a 12-time All-Star and a 10-time Gold Glove winner; Was the MVP of the 1980 World Series; Holds a number of Phillies career records including homers, runs, RBI, walks, games, runs and sacrifice files; His 48 homers as a 3rd baseman in 1980 was a Major League record for 27 years; His #20 has been retired by the Phillies

Fun Stuff:
During the 13 games he played in 1972 he wore #22; Appeared on Family Feud in 1980 as the Phillies took on the Royals in a rematch of that year’s World Series

Bonus Card #1:
This card is from 1991 but shows Schmidt with the Double-A Reading Phillies in 1971

Career Highlights:
Was named to the Brewers’ Wall of Honor and the Boston Red Sox Hall of Fame; Won 8 Gold Gloves; Hit 271 home runs over his career; Was named to the 1966 Topps All-Star Rookie Team; Was a three-time All-Star

Fun Stuff:
His middle name was Charles, so technically that makes him “George C. Scott”

Card Stuff:
His 1977 O-Pee-Chee card is in the Airbrushing Hall of Fame (or would be if there were such a thing): 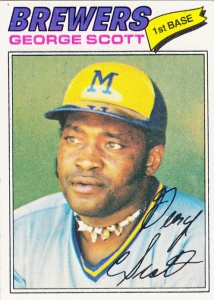