No lead-in today, right to the cards. Oh, wait, is that a lead-in?

I do remember this Thurman Munson. It’s always nice to pick up a star player on a Hostess card, that’s one fewer I have to deal with. I wonder who the older gentleman in the background is…

My issues with Hostess goes a long way towards mirroring issues I have with my collection. I would ideally like to complete all five sets, but that’s a very long term goal. I might make better progress if I focus on one of the five… 1975 is 41% complete… but would I miss any bargains for the other four sets? This is why I don’t publish goals at the beginning of the year with everybody else.

I knew that Gus Triandos was an All-Star and a fan favorite on some not-good Orioles teams in the 1950’s and early 1960’s, but I somehow missed that he was involved in the largest trade in MLB history.

The original trade had the Yankees trading Triandos, Gene Woodling, Hal Smith, Willy Miranda, Jim McDonald, Harry Byrd and players to be named later to the Orioles for Don Larsen, Bob Turley, Billy Hunter and players to be named later. Several weeks later, each team named four players-to-be-named, including Darrell Johnson, who would later manage the Red Sox, Mariners and Rangers. In all 17 players were involved in this trade.

Somewhere along the line I’ve become a Bill Virdon collector. Virdon was the Yankees manager back when I was young, naive and thought it was OK to like both the Mets and the Yankees. He’d also managed the aforementioned Pirates, as well as the Astros and Expos. Later in life, I started picking up baseball cards of players who I remember as managers in the 1970’s… between that and seeing Virdon patrolling center field while watching Game 7 of the 1960 World Series when it was broadcast several years ago, I somehow latched on to Virdon without fully realizing it.

I was just looking at a folder of scans from the last show I went to, and while looking at the cards laid out in front of me, I realized – Hey, I bought a lot of yellow cards.

…and then I said “What the heck, I’ve had worse ideas for a post”.

So here they are, the recently-acquired, very yellow, new additions to my collection.

I grew up a Mets fan and through Mrs. Shlabotnik I also became an Orioles fan.  Since I didn’t grow up following the O’s, I had a lot of catching up to do on team history.  In reading about the Orioles from the 1950’s, I was struck by a pair of players I’ve come to think of as “The Two Bobs”.  Bob Boyd and Bob Nieman were often among the team batting leaders in the late 1950’s, but I had never heard of either of them.  Boyd, who’s hitting got him the nickname of “Rope”, hit over .300 in 4 of his 5 seasons with the Orioles. 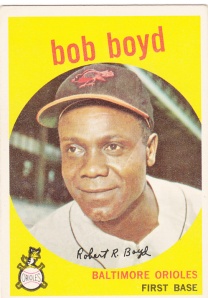 I’ve always been fascinated by cards of players who I knew better as managers, coaches or announcers.  I’m old enough to remember the last few years of Tim McCarver’s career, but I still find it a bit odd to see cards of this young Cardinals catcher.

Sometime earlier this year I came to the realization that in all my years of collecting, I’d never managed to acquire a card from 1954 Topps.  Just one of those things, I guess .  This is one of two cards I recently bought to remedy that situation.

Wes Westrum was the Mets’ second manager, which explains why I bought this particular card.

I don’t think I need to explain buying a Don Mossi card.

…I’ll admit, I do sometimes feel guilty for singling out Don Mossi for his distinctive features.

Joe Pignatano was the Mets bullpen coach from 1968 to 1981, and what I always remember about him are the tomato plants he maintained in the Shea Stadium bullpen. 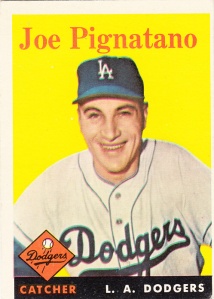 I always have trouble bringing posts to a satisfying conclusion – maybe it comes from growing up watching Monty Python sketches which often ended abruptly and without a punchline – so I’m going to close this post by listing a few favorite songs with “yellow” in the title… and true confessions time, I don’t actually care for the Coldplay song I quoted in the subject line.

What are your favorite yellow cards, songs, foods or other random yellow objects?

I recently had it pointed out to me that baseball card bloggers are legally required to have at least one post featuring a Don Mossi card.  I didn’t see that in the fine print, I’m sorry.

I wouldn’t want to be regarded as a scofflaw, so as per the TOS here’s a 1958 Don Mossi: 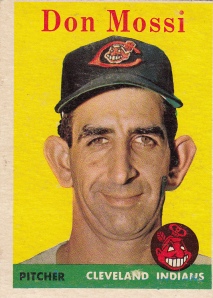