This year, Topps got me thinking about 1989.

Seeing how this year’s die-cut minis and Archives set took some annoying liberties with the original design, it got me to look at the originals with fresh eyes. 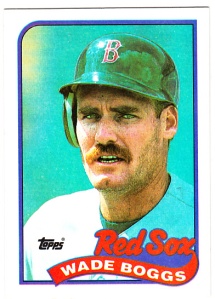 …And those fresh eyes said “This set is really nothing special.”

No offense to those of you who grew up with 1989 Topps, and for whom this set holds a special place in their hearts.  Believe me, I know how that goes.  1974 will always be MY set, just like Tom Baker’s Fourth Doctor will always be MY Doctor.

But I was in my mid-20’s in 1989, so my heart had long since been given away to another Topps set.  I collected the Topps set because it was Topps… but out of the five main sets that came out that year, I’d have to rank Topps in 3rd place.

What the heck, I may as well run down the rankings from 5 to 1. (And part of me wants to shout out “It’s Funny Five Time!”, except this top 5 was not voted on by Dementions and Dementites from coast to coast, border to border…)

In 5th place is the set that makes me want to listen to live Johny Cash albums or rattle a tin cup against steel bars… 1989 Fleer!

For most of the 1980’s, I was a Fleer guy.  I appreciated that Fleer seemed to understand that baseball cards are supposed to be fun.  88F wasn’t a favorite, but I still got a factory set.  1989 Fleer was the first Fleer set where I said “Ehhhhrrrrrrrr… No thanks.”

This set was not aimed at me in the slightest.  Sure, the cards were head and shoulders above the competition in terms of printing quality and other factors, but they were far more expensive than anything else on the market.  The “Return On Investment” just wasn’t there for me.  It  may have been a nice set, but it was way too serious of a set.

It wasn’t as nice of a design as their debut set, but I still liked it plenty.  For a novel change of pace, they actually got the team name on the front.

I think that 1989 is the only year in the history of baseball cards where I could say that Donruss was my favorite set. 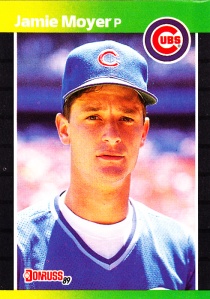 I’m not entirely sure why, to be honest.  It’s got the usual thin Donruss cardboard and the photos are printed kind of dark and a bit blurry, but something about it just strikes a chord with me.  Simple, yet colorful.

I’ve strayed off of my original topic, which is 1989 Topps being at a crossroads.  For years I intended to collect as many Topps sets as I could, but that goal is several years gone.  For now, I do have a long-term goal of completing at least one set from each year starting with 1973, but as I’ve mentioned, there are two sets in line ahead of 89T.

To be honest, there’s one little detail that keeps me from just going ahead and purging the set and being done with it… and that’s the fact that I have 774 cards from this set.  Yes, that’s right, I’m 18 cards away from completing it.

To be honest, though, completing this set wouldn’t really feel like an achievement for me.  I think that completing it would be a mild relief with regards to one fewer set to keep track of.  I can also accomplish that same relief by getting the one or two cards I would really want from the remaining 18, declaring the set a “TKO” and then going back and dumping all the Dale Mahorcic and Don Heinkel cards that do nothing beyond take up space in a monster box.

It’s a tough choice, but to get my collection to the size I’d like it to be, I’m going to have to make these tough choices…

I’ll be frank about this, I’ve been waffling on this for a couple of weeks now.

I also haven’t sat down with the set and gone through it… Maybe I’m forgetting something or missing something about the set that would make it worthwhile to keep.

…Or maybe it’s the prototypical junk wax era set that I could replace for $5 if I ever changed my mind.

Does anybody want to make an impassioned plea for or against 1989 Topps?

The subject line should be read in the voice of the late Gene Rayburn, host of “Match Game”, the greatest game show the 1970’s had to offer.

The other morning I was feeling a little down… I’m not even sure why, but I just felt a bit dejected. Nobody was around at lunch, so I ate my sandwich and read a magazine.

That wasn’t working for me and since it was nice outside, I figured maybe I should go for a walk.

So what else was there to do? I drove over to the nearby Target and bought a repack.

Plenty of junk wax, of course. Only one Topps All-Star Glossy…

…but if I’m only going to get one, at least it’s Gary Carter as a Met, and a card I needed.

I also got an Oriole knocked off of my very, very large wantlist:

I got an autograph! Yay! 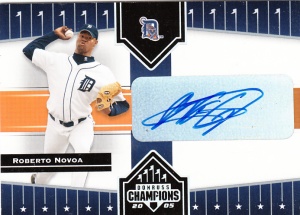 This is the second autograph I’ve pulled from a repack in the past couple of months… Neither one was anybody I’m interested in, but I’ll take a signed card over another 1989 Fleer card any day.

As I was thumbing through all the junk wax, I ran across this:

A blank piece of cardboard? WTF?

Then I turned it over…

EXCELLENT!  A blank-front Dodgers Leaders card! Somebody in Q/A was snoozing on that day in 1989. This one’s definitely going in my 1989 binder!

I had been hoping for a Pirates/A’s World Series, but now my best-case scenario is Cardinals/Tigers… and to be honest, at this point I’m just hoping I don’t have to see the Red Sox & Dodgers, the matchup I least wanted to see.

Fox says they’d like to get they two biggest markets left, Boston vs. Los Angeles.