The other day I was talking to someone about The Nightly Show, which is the new show on Comedy Central which airs after The Daily Show.

After a few minutes of conversation, I suddenly realized that instead of referring to the host as Larry Wilmore… 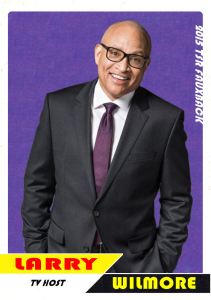 …I’d spent several minutes referring to him as Larry Milbourne.

Larry Wilmore may have his own TV show, but he was never named to the Topps All-Star Rookie team…

Wilmore didn’t have the walk-off double in the Mariners’ first-ever win (4/8/77). 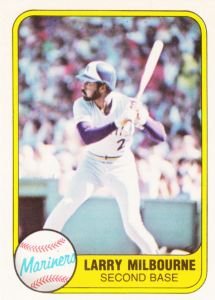 Two years ago I created a custom set I called Simon And Gintfunkel, and it was intended as a way of poking fun at Allen & Ginter, Gypsy Queen, Goodwin Champions and all of the other tobacco throwback sets being cranked out. 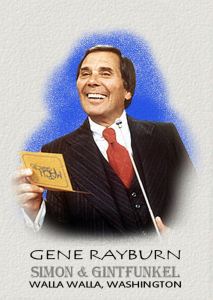 I had fun with it; hopefully I wasn’t the only one.

Last year I made a brief run with another S&G design, but to be honest, the joke had already run its course. I liked the design I’d created (which was cribbed from U.S. currency)…

…but as a parody it kind of flailed around a bit, crawled into the corner and died.

(Side note:  Kaká is now plying his trade with the new Orlando City team in MLS.   “Kaká”…  Hee hee heeeeeeeeeeee).

A few months ago I made a half-hearted attempt at designing a third S&G set, and that attempt ended with me asking myself why I was even bothering.

After some navel gazing and toenail contemplation, I realized that I enjoy having a custom design for non-baseball purposes. It’s useful for illustrating points and highlighting people, places and things which didn’t really fit into a custom baseball card design.

I also gave myself a little kick in the butt when I filled out the questionnaire for Nachos Grande’s “Better Know A Blogger” series, and answered the question about sparking Topps’ creativity with the following:

I would take the people who’ve done such a nice job of creating original A&G designs and assign them to create a new set which has a “Vintage Topps” feel to it – and yet is not based on a vintage set nor just a lazy ripoff of existing vintage card designs.

I know something like this is not happening anytime soon, and I pondered taking matters into my own hands.

One night I was suddenly possessed by the custom card muse, I sketched ideas out on paper, which lead to more ideas and…

Today I am introducing the 2015 TSR Fauxback set:

Does this design look familiar to you?

Here, take a look at another one…. 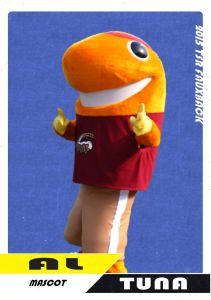 I’ll be honest, the ideas for this came together pretty quickly – almost too quickly – which made me wonder if I was subconsciously plagiarizing the design from somewhere else. Does anybody have any input on it?

And I sincerely hope that I didn’t inadvertently lift this design from somewhere, because I’ve got another card like it in tomorrow’s post…

For the record, the term “Fauxback” usually applies to throwback uniforms which don’t “throw back” to anything real… Like the “1979 Tampa Bay Rays” uniforms.

I was brainstorming names for the set, thought of “Fauxback” and decided it was a perfectly apropos description of what I have in mind.

Lauren Cohan is an actress I have a mini-crush on. She’s best known as “Maggie” on The Walking Dead, and I’m not going to be too happy if and when her number comes up on the show. Lauren grew up in New Jersey until she was 14, which is when her family moved to London… which leaves her with an accent that’s interesting listen to when she’s talking in her normal voice.

Al Tuna is one of the mascots for the AA team in – of course – Altoona, PA.  I’ve never seen the Altoona Curve play at home, but I love the idea that they have a fish mascot named Al Tuna.