The Hot Stove set is winding down for another winter… The whole point of the set is to give everybody a “sneak peek” of what players will look like in their new uniforms, but once Spring Training starts, there’s no need for photoshopped images when the real thing is running around under the warm sun, being photographed by countless photographers.

But don’t worry about that just yet, not when I’ve run out to buy a big ol’ box of Apple Jacksons cereal! 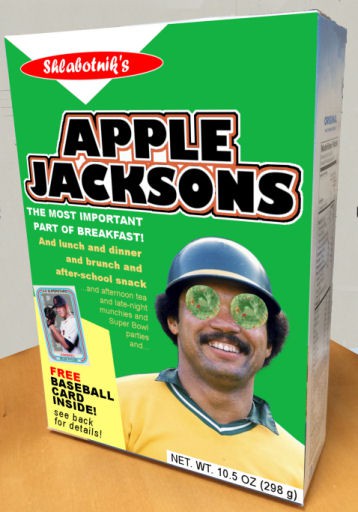 The last winter or two I’d always keep a Hot Stove slot open for some big Mets or Orioles acquisition, but this winter each of my team’s biggest moves was to re-sign one of their own.

Instead, we’ve got notable players leaving, including former Met Daniel Murphy, who signed with the rival Nationals as a free agent. 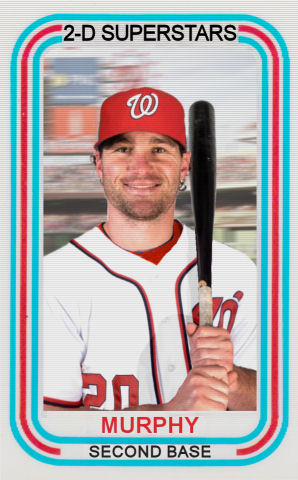 Murphy had been with the Mets since making his Major League debut in 2008, and I will miss him, as will many Mets fans…  But I also think that letting him walk was the right move, and I wish him isolated success with a divisional rival (who will hopefully disappoint yet again).

As I’ve pointed out before, the customs I make up using the 1965 Topps CFL design are ones where I did not “photoshop” the player into his uniform. In this case, I ran across a nice image of Paul Goldschmidt wearing one of the Diamondbacks’ new uniforms. 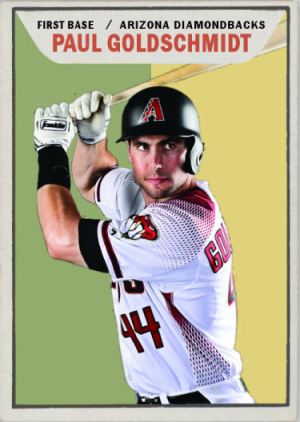 I don’t love these uniforms… far from it… but I have less of a negative reaction now than I did when they were first unveiled.

Getting back to the clock ticking on the Hot Stove cards… I’m definitely doing a post next weekend, and then after that I *may* do one more… depending on whether I have players I want to “photoshop” and an idea for a cereal box.

Truth be told, I really need to get working on my 2016 TSR design. I’ve got a number of prototypes in the works, but none of them have yet to make me sit up and say “Yeah, yeah, that’s it…”

But in the meantime, if you have any special requests for someone you’d like to see on a Hot Stove card before the curtain drops on another set, just leave a comment and I’ll see what I can do. It doesn’t have to be a star player, so if you want to see Doug Fister with the Astros or Corey Dickerson with the Rockies, just let me know.

So I was in Target last night, and on the way out I found some $1 post topics.

…That is to say that they had packs of 2015 Topps Stickers. 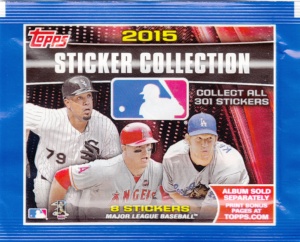 When I picked up the pack, something about it felt unfamiliar, yet familiar. I’ll get into that in a bit.

The first sticker I saw was Cardinals’ prospect Randal Grichuk… 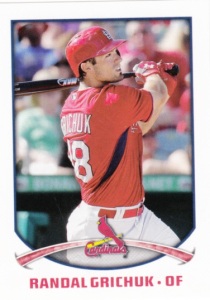 …And I made a face at the design.  It wasn’t a good face.

After a couple of years where the Topps Stickers would’ve made decent looking cards – to the point where last year I joked about them being “Adhesive Minis” – we have this design that is… um… not attractive in the slightest.  Not to me, anyway.  Maybe they look better when put in the album… I confess, I didn’t buy the album, so I can’t say.

Next up is a Daniel Murphy sticker.  Will one of these stickers have any more appeal when it’s one of my teams?

Ahhhhhhh… Yeah, that’s not good.  I will not be buying any more of these suckers.  Just as well, because I never knew what to do with the ones I’ve kept from past years. 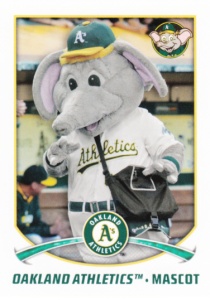 …I find it interesting that certain mascots are listed by name, while others are just “Mascot”.

I also happened to get a sticker that I felt obligated to post, as it features a player who is a favorite of fellow blogger Fuji, Lord and Master over The Chronicles Of Fuji. 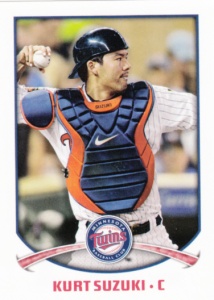 And this is as good a time as any to go to the one thing I did find interesting about this year’s stickers, and that is their point of origin (circled in red on the back of the Daniel Murphy: 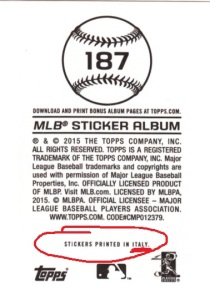 Hmmm… Stickers printed in Italy.  Who do we know who prints stickers in Italy?

The size and feel of the stickers is also different from last year’s set.  This year’s stickers are slightly larger than last year’s.  More significantly, last year’s sticker backings were thin cardstock.  These are… well, these are just stickers.  Stickers that are very similar to some Panini NFL Stickers I have in my “Give it away next Halloween” box.

The final piece of damning evidence…  Here’s last year’s pack, which was very similar to a regular Topps pack: 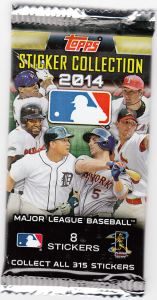 And here’s a Panini NFL pack from last fall: 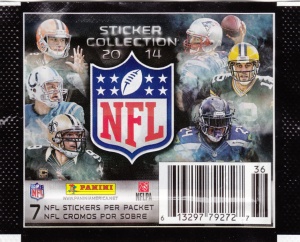 Anyway, enough of the investigative reporting… To summarize: Stickers ugly, stickers are stickers and not adhesive minis, stickers made in Italy and quite possibly subcontracted to Panini.

Earlier this week we established that nobody but me would be buying 2015 Heritage (Cheap SP’s for me!  Woo-hoo!).  What about these stickers, will anybody be pasting them in their albums?

I’ve got a Mets wall calendar at work, and it seems like a bad omen when a player has appeared on the calendar;  either the player’s gone or is about to be gone through injury, trade or otherwise.  Here’s what happened to each player pictured on the calendar:

January:  Daniel Murphy – No problems here, other than there being rumors this week about him being traded.

February:  Ike Davis – missed the season with an injury

April:  John Maine – had become a free agent over the offseason, didn’t pitch in the majors in 2011.

May: Jose Reyes – I don’t need to tell you what the story is here.

June:  Johan Santana – missed the season with an injury

July:  Jeff Francouer – had been traded during the 2010 season

August:  Francisco Rodriguez – had been traded at the All-Star break

September:  Carlos Beltran – had been traded to the Giants at the end of July

October:  Jason Bay – Still around but coming off a disappointing season 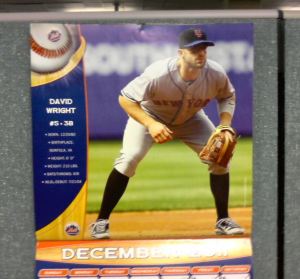 Now David Wright is on my calendar and I can’t help but wonder… is this an omen of something bad to come?  Will he get traded at the Winter Meetings?  Will he be walking down a Manhattan sidewalk and have a grand piano dropped on his head?

With any luck, only thing that’s headed out the door is the black hat and socks which David’s wearing.