…As we continue to hopscotch through the 1976 SSPC set…

‘Round here, folks call me:  Catfish

You may remember me from… Pitching in relief with the Astros and Tigers for several years.

In 1976, Crawford… Was largely a guy out of the bullpen, but did pitch the only complete game of his career, which is notable given that over his career he had just 14 starts in 181 games.

About the back of the card:  There’s a reference to Arizona State being “the baseball factory”, and that’s a reference both to ASU’s status as one of the premier college baseball programs, but also to the impressive bunch of players to come out of ASU in the Sixties and Seventies.  At the top of the heap were Sal Bando, Rick Monday and Reggie Jackson, but at the time this set came out there were other Major Leaguers like Duffy Dyer, Larry Gura, Gary Gentry, Lenny Randle, Craig Swan, and Eddie Bane.

One other thing about the back… “Denver” refers to the Denver Bears, the Astros’ AAA team in 1974.

More about that memorial patch…Don Wilson was an outstanding Astros pitcher in the Sixties and Seventies who died of carbon monoxide poisoning in January, 1975. At the beginning of the 1975 season, the Astros retired Wilson’s #40 and they wore the above patch for the 1975 season.

Whenever Topps does something Heritage-y, Archive-y or Lineage-y, my thoughts turn to “How will they re-create these cards for teams which didn’t exist at the time?”

So when I saw that they were going to do 1972 minis, my first thought was –

Well, to be honest, my first thought was “Minis. Why did it have to be minis?”

– But my second thought was “I’ll be curious to see how they handle all the teams that they can’t just copy from the original 1972 cards” (i.e. the Blue Jays, Mariners, Rockies, Marlins, Rays, Diamondbacks and Nationals).

So after pulling this Giancarlo Stanton card from a pack…

…I just shook my head and disapprovingly said “Duuuuuuuuuuuuuude…”

The first thing I noticed was the fact that the “LINS” part of “MARLINS” sort of sags down closer to the border, which looks sloppy.

…but something else about it looked wrong.

After a minute or two, I realized that the big problem is on the perspective. The letters are supposed to look like they’re coming out from behind the photo, all of them originating at some distant vanishing point.

Here, I’ll give you an example… I took a 1972 Frank Robinson card and used pink lines to extend the drop shadow on the letters (This was done virtually; no HOFers were harmed during this exercise):

The letters are meant to look like they’re emerging from some distant point behind Frank’s head.  These lines don’t all converge on exactly the same point, but that’s probably just me not drawing the pink lines right… it’s still close enough to get the idea across.

But look at what happens when I do the same thing to the Stanton card: 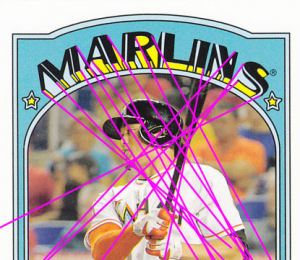 See? It’s a freakin’ mess. The person who did this may have the skills, but didn’t “get” what the original artist was doing… or maybe they weren’t given enough time to do it right.

Whatever the reason for this, it fails a critical test: Is it better than I could’ve done?  I’ve got some artistic ability and I like to play around with Paint Shop Pro, but I am not, by anyone’s definition, a Graphic Artist.  I’m not even one of these people who thinks they can call themselves a Graphic Designer because he/she made up a business card saying that they’re a Graphic Designer.

…So when someone who makes a living out of manipulating pixels, someone who ostensibly calls this their career, when that person produces something which makes me feel like I could do better, then that’s a failure.

You know what? I’m not objective on this. We should ask someone who doesn’t have a stake in this… someone like…. Oh, I don’t know… Someone like the 1971 National League ERA Leaders. I just happen to have them here… OK, guys. Look at this mini. What do you think of the job Topps did on this card?

See, it’s not just me. Even Seaver, Roberts and Wilson are unimpressed.