I’ve spent pretty much my whole life on the East Coast, and while I’ve been on vacations out west, in many ways the Pacific Coast may as well be another country… I mean, I’ve never been to a Shakey’s Pizza, I don’t listen to radio stations whose call letters start with “K”, and I consider an omelette with ham, peppers and onions to be a “Western Omelette”, not a “Denver Omelette”.

One other aspect of West Coast living that’s long been hidden from me is Mother’s Cookies cards. Not only do we not have Mother’s Cookies where I am, but the cards are seldom seen at card shows. Because of that, they’ve acquired a certain mystique among those collectors who refer to themselves as “Joe Shlabotnik” and write blogs about baseball cards.

During a semi-recent COMC shopping event — one which has a name I’ve grown tired of typing, so I’ll call it “Viernes Negro” — I managed to pick up not one, not two but THREE Mother’s Cookies cards of Shlabotnik Report favorite Erik Hanson.

Erik’s from New Jersey, and he don’t eat no Denver Omelettes. 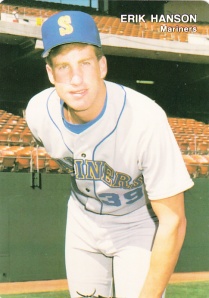 …and the 1993… With the 5 o’clock shadow, the darker uniform and the night photography, I consider this to be the “Dark Knight” of Erik Hanson cards. 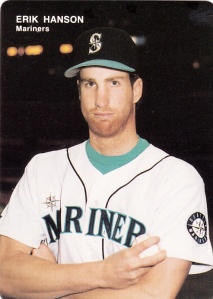 Special Bonus Feature! For a limited time only, you can see the 1996 Leaf Signature Series Erik Hanson I got!

That’s one thing that’s nice about collecting non-star players… Affordable sigs! I got this baby for less than a buck. Suck it, Jeter fans!

I promise to get back to something with more universal appeal tomorrow… Hopefully I’ll be able to find a pack of 2014 Topps and be one of the 1,828 bloggers writing about that subject.