I recently completed a team set from a nearly-24-year-old Topps product that I’d never heard of until about a year ago.

Back in 1990 Topps sold a limited number of box sets via television ads. There were six different 66-card box sets; Cubs, Red Sox, Cardinals, Yankees, Mets and also a set of All-Stars (which I would guess was tested nationally).

I haven’t been able to find a TV Mets set that fits within my budget, but I did get all four Mets from the All-Star set.

These cards have a glossy coating on the front and (obviously) a design that was different from the regular Topps set. Here’s the back.

These cards are nice, but main appeal of them lies in the fact that they’re something different that eluded my attention for 20+ years.

Despite the set name, it doesn’t appear that all of the players in the set were on the all-star team… Unless perhaps they were named and then replaced due to injury.

I also found out that his first name is actually Charles.  Charles Sidney Fernandez.  How did I not know that?

Hojo was the starting 3rd baseman on the 1989 All-Star team, and in that same year he won a Silver Slugger and lead the league in Runs…. Just in case you wanted to know.

These cards seem to be relatively rare by 1990 standards… there aren’t hundreds of millions of them floating around, anyway, and there are only a handful of the box sets out on eBay at any given time.

Does anybody have any of these cards?  I only recall seeing one blogger make reference to any of the six sets.

Before I wrap up, I wanted to share something I discovered last night. I was looking at my WordPress stats and in the list of “referrers” to this blog I saw something from mlb.com.

“What the what?” I said to myself. What could be on mlb.com that refers to my li’l old blog? So I clicked on it, and found a blog  post entitled “Did you know these 14 Major Leaguers also starred in other sports?”

In mentioning that Tom Glavine had played hockey, they had an image of this 1992 Pinnacle card: 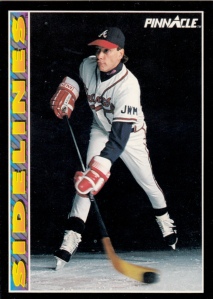 …and it was literally THIS card, or more specifically, this image of my card… It originally came from this 18-month-old post.  The article’s author had borrowed my image and and given credit by providing a link to the original post.

I know this isn’t a particularly unique event in internet history, but there’s a small boy inside me who’s giggling and saying “There’s an image of MY CARD on mlb.com!!!!”

The funny thing is that the mlb.com article is from over a month ago. Guess I should look at my site stats more often.

While poking around COMC on Black Friday weekend, I stumbled across some Mets-related box cards… You know, the cards that Topps, Fleer and Donruss used to put on the bottom and sides of wax boxes.

This Howard Johnson card is, of course, from a 1988 Topps box.

I probably overpaid to get these, but when shopping on COMC I always try to factor in the convenience… I don’t mind paying a little extra for the fact that the cards are easy to find and easy to obtain once I’ve found them.

I also got this 1986 Dwight Gooden box card…

…and later I realized I already had this card, only I have it in panel form. At least this way I’ve got one to put in my mid-1980’s Mets binder as well as keeping the original one in box-bottom form. 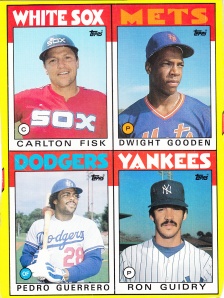 Hmmm… I feel like this post needs something more.  How about a 2002 Upper Deck Minor League card of Jose Reyes which shows him in a Binghamton Mets uniform, features the Binghamton Mets logo at the bottom left, says “Binghamton” in silver foil, lists the minor league level as “AA”, which is the classification of the Binghamton Mets and at the very bottom the card says “St. Lucie Mets”.

Before I get into the main subject, I’d like to point out that there’s information on my COMC Black Friday plans below, as well as a plea for blogrollical help.

Now, I normally wouldn’t pay much attention when a team I don’t follow announces their coaching staff… but in the case of yesterday’s announcement about the Mariners’ coaching staff, it read like a “random Mets cards” blog posting… so I figured I’d make a random Mets card posting out of it.

New M’s hitting coach Howard Johnson was a member of the 1986 World Champion Mets, he holds or is tied for a couple of Met team records including “extra base hits in a season” and one could make an argument for his inclusion in the Mets’ Hall Of Fame.

John Stearns, the new 3rd base coach, was the Mets’ starting catcher for a couple of years and was an All-Star four times. 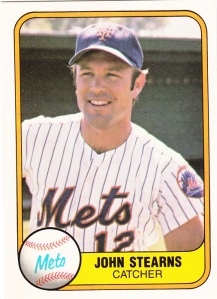 Infield coach Chris Woodward was a Met in 2005 and 2006 and during those two years the only position he didn’t play was pitcher and catcher. He also DH’ed some. 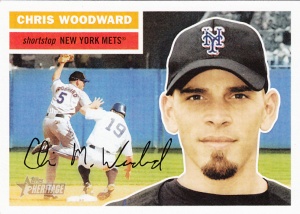 Bullpen catcher Jason Phillips has actually held that job for 5 years, but he’s a former Met, and Mrs. Shlabotnik likes him because he wore glasses on the field.

When Black Friday comes, gonna sell my cards online
Gonna discount ’em all and hope they sell this time…

COMC is having a Black Friday special, and not only will I be participating, but I will have 500 new cards added to my inventory by then (I’m in the process of pricing them).  Parallels and inserts (many from 2013), manupatches, vintage, 1986 glossy cards, rookies and pre-rookies, oddballs, 1970’s O-Pee-Chee baseball, 1976 SSPC, hockey, basketball, football, even Donruss Truckin’ cards.

Finally, I’ve been having problems with my posts showing up in blogrolls, and I hoping someone’s had the same problems. After reading through blogger.com support, I wonder if I’m having a problem with pasting text from MS Word (which I do) or with “auto-pagination”, which I’m not clear on what that means, but it is connected to other people with the same problems.

If anyone has any suggestions, hints, etc., I would love to resolve my situation.