Before Tom Seaver wore #41 for the Mets…

…That number was worn by left-hander Gordie Richardson.

Aside from pitching in three seasons with the Cardinals and Mets, Gordie Richardson also pitched in two 1964 World Series games against the Yankees, a series that the Cardinals would win in 7 games. (I debated on whether I should mention Richardson’s 40.50 World Series ERA, or the fact that he gave up a grand slam to Joe Pepitone).

As hard as it may be to believe, before future HOFer Ichiro wore #51 for the Mariners…

…that number was worn by HOFer Randy Johnson! 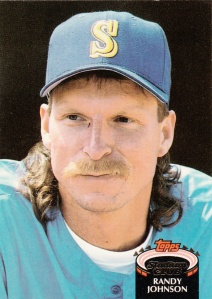 I started this post a while ago, and while I was double-checking my research as a step towards publishing, I realized that the last guy to wear #51 before Randy Johnson was a guy I’d included in Monday’s post:  Rey Quinones!

51 must have had some sort of personal significance for Quinones, because he also wore that number with the Red Sox and in a brief stint with the Pirates.

As it turns out, there were only four players to wear #51 for the Mariners, so I figured I may as well scan the forth guy… Bill Wilkinson. 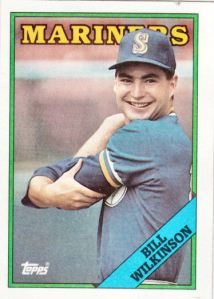 One of the more interesting things about Bill Wilkinson is that he’s from Wyoming, and there aren’t many Wyomingans(?) in MLB history.  16, to be exact.  The most notable ones are Tom Browning, John Buck, Mike Devereaux, Dick Ellsworth, Mike Lansing and Dan Spillner.  Fun fact:  6 of the 16 Major Leaguers from Wyoming were born in Cheyenne.

Getting back to #51… If Wikipedia is to be trusted, no coaches or managers ever wore #51, so these four players are all of the 51’s in Mariner history… And I’d have to think that this will never change.  Ichiro is a sure-fire HOFer, so even if the Mariners never officially retire #51 (which I doubt), they’d probably never give out a number worn by two HOFers who established themselves in Seattle.

I’ve been making custom faux-3D baseball cards based on the 1974 Kellogg’s design for a while now.  During that time, it never occurred to me to take things to the next level until CommishBob from The Five Tool Collector complemented my customs by saying that “They look like they came right out of a Kellogg’s box”.

Had my wife been in the room at the moment I read his comment, she surely would’ve seen the cartoon light bulb pop on over my head.

After all, where should virtual Kellogg’s cards come from if not from a virtual cereal box?

If I do another batch of 3-D cards next winter (and I’m leaning towards using the 1976 Kellogg’s design, but that’s a long way away yet), I’ve got an idea to do a series of boxes as well… and those posts may well be like this one in that you won’t know what custom you get until you’re past the box and find that it contains…

If you combine the two Céspedes trades together as if it were one three-way trade that took a really long time to finalize, the Red Sox gave up Jon Lester, Johnny Gomes, Alex Wilson, minor leaguer Gabe Speier and cash for Rick Porcello and a 2015 competitive balance round B pick… given that Lester and Gomes became free agents, I would say the Sox came out alright on that one.

Getting back to the general concept of “Things I’d like to do differently next time”, I’m thinking I might carry two “Hot Stove” designs… One for the players I photoshop into new uniforms (like above) and one for the players who were photographed in a new uniform, like the Nelson Cruz showing off new alternate uniforms a couple of weeks ago, or like this Ichiro, which I did this way because I couldn’t bring myself to finish photoshopping him after I found this photo where it wasn’t obvious that he’s wearing a jersey over a dress shirt.

You know, just to make it easier to distinguish between “This is Matt Kemp photoshopped into a new uniform” and “This is Joe Mauer from a press conference where he was modeling the Twins’ new home uniforms”.

As of right now, I’ve got an idea in mind for the design of this “insert set” in the 2015/16 Hot Stove release, and it’s not based on a Kellogg’s set… but like I said, plenty of time there.

As long as I’m writing, I’ll just mention that my travels yesterday took me past three different Target stores and none of them had 2015 Topps… Although one had a shopping cart full of sealed cases that said things like “New Releases”, “Excell Marketing”, and “Display immediately”. Thanks, guys.

Ichiro Suzuki is one of two notable baseball players to not have a current contract with Topps. As a result, he didn’t get a card in 2014 Heritage, so Ichiro fans are left wondering what such a card might look like.

I have my own thoughts on the subject… 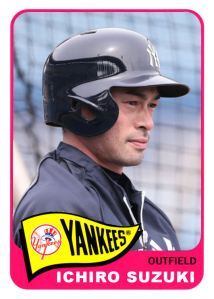 If you came here through an image search – and posts like this draw a fair amount of drive-by hits – I will explain that the image above is a virtual baseball card I made because that’s one of the ways I get my jollies.

Another way I have fun with custom cards is by making cards for my own card set, one which is entirely my own design:

I should also point out that Mr. Suzuki and/or his agent are the ones who deprived us of real cards, so if they don’t play nice by me, I won’t play nice by him… He get’s his full name here. If you don’t like it, Mr. Suzuki, you can go sign a contract with Topps.

Back in 2002, Topps issued a 3-card promotional set of cards for the then-upcoming inaugural Topps Total set.

Thanks to Nick over at the “Dime Boxes” blog, I found out about these cards in time to include them in my COMC Black Friday frenzy.  I got all three for under $1.50.

All three promo cards feature different photos, and have some variations on the back as well.

First off, we’ve got Ichiro.  Mr. Suzuki was coming off his ROY/MVP season when this card was issued, so it’s no surprise he would be featured here. 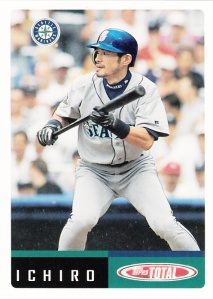 …and here’s the “regular” Topps Total card; they should’ve stuck with the pre-production photo:

Like Ichiro, Barry Bonds had also been the MVP the previous season. Here’s the pre-production card:

…And the regular card; again, I prefer the pre-production card of the big jerk:

The final card of the trio is for Hank Blalock, who was a top prospect at the time… Baseball America ranked him at #3 in 2002, calling him “the best pure hitter in the minors”. I believe this photo is from the 2001 Futures Game.

You want to know who the two guys ranked above Blalock were, right? Josh Beckett and Mark Prior.

Here’s the regular Total card. This is the only one of the three where the pre-production card is the lesser of the two.

And because I can’t just let things slide without showing how the backs differ… The most obvious difference is the card number. The numbering of the “team set” in the lower right-hand corner differs as well in that they went from a two-letter to a three-letter abbreviation (“SM” to “SEA”).  Topps also couldn’t decide whether to put Ichiro’s name up top or down low.

Ichiro and Bonds have different write-ups on their backs.  Blalock’s back has the same text, but some minor differences in how the minor league stats are presented.

In terms of how much I enjoyed it at the time, 2002 Total is one of my top sets of the 21st century.  After being bombarded with shiny, foily, garish, “More is MORE!” sets since the early 1990’s, the idea of an understated, simply designed and relatively appealing 990-card set which included relief pitchers and bench players was very exciting to me.  I first saw packs of Total at a show;  I bought a couple of packs and immediately ripped them… I can still remember standing in a show aisle, thumbing through cards and maniacally giggling about my wishes coming true.

I won’t suggest that the set has held up well over the years, but it’s still a personal favorite and is the only Total set I’ve completed to date.

I miss Total, and while I know it’s never coming back, I do wish that the base Topps set would be more Total-y.

Aside from being a collector, I’m also a uni-nerd… I’m fascinated by sports uniforms, and I love to see the authentic examples on display at the National.  I featured a 1967 Tom Seaver uniform on Monday, and thought I’d share a few more examples (Auction house listed in parentheses).

1973 Padres Road Jersey (Mears)  I put this one first because it’s the most eye-catching of the bunch – not necessarily a good thing.

St. Louis Brown’s uniform (I think this might be Heritage Auctions, but I’m not 100% sure.).

Ichiro & Sadaharu Oh jerseys  (Heritage Auctions).  The Ichiro jersey is from Jackie Robinson night in 2009, and he was wearing it when he tied Isao Harimoto for the Japanese career hits record. 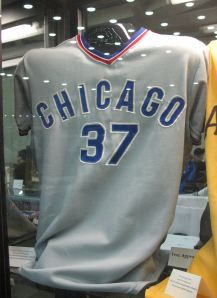 1938 Babe Ruth Jersey, from his season as a coach with the Brooklyn Dodgers (Memory Lane Auctions) 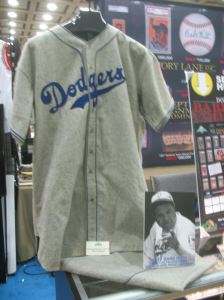