Although I haven’t gone anywhere, some of you may have thought I took a week off because many of the blogrolls have not recognized anything I’d done since last Friday.

Yesterday I found that my most recent post finally got recognized, and in celebration of that problem being resolved – knock on wood – I’m going to share some vintage cards I got at a show last month.

In 1979, when this photo was likely taken, Jim Palmer is starting to show signs of age – you can see the beginnings of crow’s feet, for example – but he still had great hair. This looks like it might be a postgame interview, and yet “Cakes” doesn’t have hat head. How the hell does he do that?

When I ran across this card in a box of relatively cheap, well-loved vintage, I was surprised that I didn’t already have it. I couldn’t tell you how much time I spent staring at an image of this card when it was featured on one of the 1975 Topps cards celebrating the company’s 25th anniversary.

I just got curious and looked to see how many of those featured cards I own, and the answer is 6 out of something less than 50… “less than 50” because some of the cards, like the 1962 Maury Wills, didn’t really exist to begin with.

Here’s a freshly-minted Expo and poorly-scanned card of Larry Jaster, who went 9-13 for the NL Champion Cardinals in 1968, and found himself an Expo in 1969. Funny how those things work. 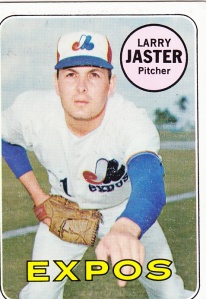 I’ve had a thing lately for 1969 later-series cards which pictured players in the uniforms of that year’s expansion teams. I remember how excited I was about the 1977 Blue Jays/Mariners expansion, I think I would’ve been beside myself if I were old enough to follow baseball when four new teams came into the Majors.

Al Ferrara is another recent mini-obsession of mine ever since I found out about his attempts to get into acting. I really need to track down the episode of Gilligan’s Island he was on — he played “Native” in the episode “High Man On The Totem Pole”, which I’m ashamed to say I remember just from the title.

…You see, the castaways find a totem pole, and the head at the top of the totem pole looks like Gilligan. Zany hijinks ensue.

I’m diggin’ the capital “A” on Ferrara’s road jersey… I’d never noticed that before, but I like it.  Bonus point to the Dodgers.

I’ll wrap this post up with a contender for “Most uninteresting vintage baseball card of all time”.

I’ll be honest – I would never have bought this card if I didn’t need it for my 1962 Mets team set.

I’ve got a bunch card show purchases to share; I really need to be better about keeping up on them.

And for those who were wondering if I’d include the scene from Monty Python And The Holy Grail which was quoted in the subject line… Would I deprive you of Python? Of course not!

Update:  I have angered the blogroll gods with my hubris… It’s currently 1 hour after I’ve posted, and I’m not showing up on blogrolls.  Poop. 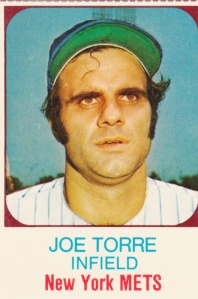 In light of the apparent demise of Hostess as a entity – and don’t worry, Twinkies and Ho-Ho’s and the like will resurface, it’s just a matter of who purchases the brands and when they gear up production – I thought this might be as good a time as any to give you a run-through of the 5 years of Hostess baseball cards.

Hostess cards were printed on the bottom of “family sized” boxes of Hostess snack cakes from 1975 to 1979.  Each year’s set consists of either 150 cards (if you’re me) or 50 3-card panels (if you’re looking for a greater challenge and have a greater budget).

Certain cards/panels are somewhat rarer if they were printed on the box for a less-popular snack cake (i.e. Chocodiles).

Topps provided the images, and did the airbrushing as needed, like on the above 1975 Joe Torre.

The 1976 set had bold red, white and blue stripes, because it was THE BICENTENNIAL and you couldn’t not do something to commemorate the fact that the country was 200 years old.  I think there was a federal mandate or something. 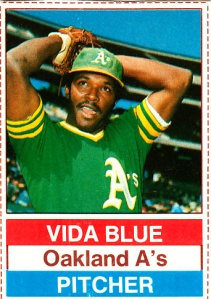 Business as usual for 1977;  I find this set the least appealing, but that’s a matter of relativity;  none of the sets are what you’d call beautiful in and of themselves, but the card design is not why I collect these.

1978 was more subdued than the previous two years, but not bad looking in a minimalist sort of way.

1979 just took the footer and moved it to the header. 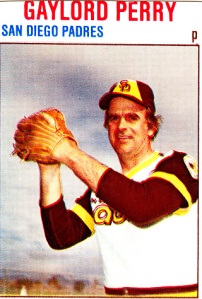 Twinkies can be distinguished by the black stripe on the back, and the fact that they come in single panels rather than panels of three. 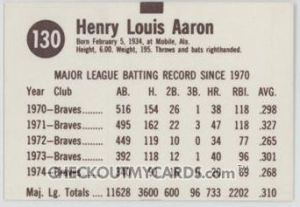 Hostess cards don’t have the black stripe, but every year’s card looks pretty much like this:

If you collect individual cards, there’s almost no reason to distinguish between Hostess and Twinkies, and not everybody does. I don’t, and I’ve noticed that COMC.com doesn’t.

If you really want to go crazy, or have a larger collecting budget than I do, negatives used for Hostess sets have turned up in Topps Vault auctions.

The mid-to-late 1970’s were my peak collecting years as a kid, but I long ago completed the Topps sets from 1974 to 1978.  Collecting Hostess cards allows me to keep collecting the players of my youth without getting into some of the more arcane sets of the era. 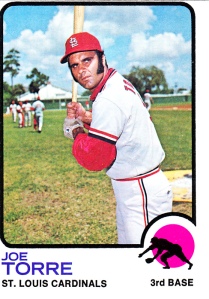 Joe Torre (but not his awesome early 1970’s sideburns) was recently named manager of the US team in next spring’s World Baseball Classic.

I had a mixed reaction to the WBC’s in 2006 and 2009.  I watched the WBC because it was the first baseball after a long winter, but the format had nothing to do with it;  I would’ve watched if they chose up teams sandlot-style.  To be fair, I’m not much of an international competition type of guy, I don’t get into the Olympics all that much… that’s mainly an opportunity to see sports I wouldn’t normally see, rather than anything I get emotionally engaged in.

I’m curious to know how everybody else feels about the WBC.  Do you get into the international competition?  Are you just there for the baseball?  Or do you ignore it completely other than praying that nobody from your team gets hurt from ramping it up too early in the year? 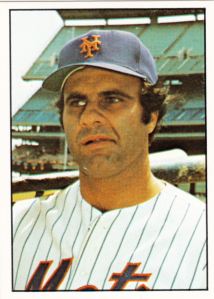 *Sigh* I’m sorry, Joe, but it’s true.  I had two different posts I was working on for Mets Monday, but I didn’t quite get either one ready in time.  As a result I had to dip into my folder full of scanned cards and select one which is of interest but about which I have little to say.

I have a small handful of SSPC cards, all of them Mets.  I’d like to get more, but you rarely see these offered and I think that, given the current state of my collection, I should focus on my primary vintage goals and not chase after bright shiny objects.

Joe Torre says “I’ll betcha didn’t even think to scan the back of my card, did ya, rook?”

(Since I don’t have time to figure out how to insert a video clip, just imagine Charlie Brown walking away dejectedly with his head hung low.)