Fantasy-wise, Greg Holland was the biggest surprise for me in 2013. I drafted him before the season, but admittedly didn’t know much about him other than he’d been named the the Royals closer during the 2012 season. 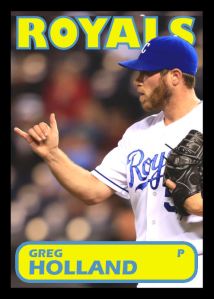 When doing a Image Google to find a photo of Greg Holland, I somehow ended up with the same image as was used on this Simon & Gintfunkel card: 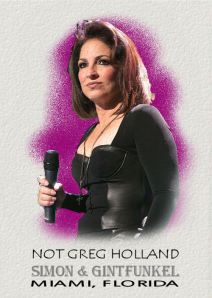 When I clicked on the link provided, I ended up on a page full of HTML and no reference to who this singer in the photo was, nor what she had to do with Greg Holland. I did ultimately find out that it’s Gloria Estefan; why she came up in a search on Greg Holland remains a mystery to me.

When it comes to fantasy baseball, I pride myself on my ability to pick up impact rookies during the season. Last year it was Mike Trout; this year, I picked up a couple of kids you may have heard of…

I won’t deny that Puig’s had a an impressive season and may well have turned the Dodgers’ season around, but when it comes to the NL Rookie Of The Year award, my money’s on this guy: 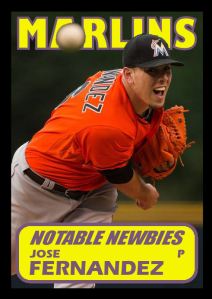 Before recapping some of Fernandez’ achievements, I will remind you that all of this was with a very bad team that lost 100 games…

Most other years, Puig is a shoo-in… but I have to think that Jose Fernandez takes home the hardware.