I felt like showing a couple of oddballs, and these Maryland Lottery cards from 10 years ago certainly fit the description.

These standard-sized cards were sold in packs of four with a $10 lottery tickets, and was part of a contest where the first 100 people to collect all 50 cards would win a prize.  Cards 46-49 were short-printed and card #50, Babe Ruth, was “shorter-printed”. 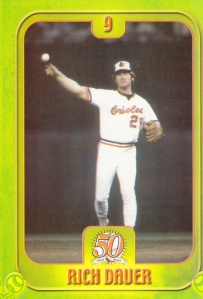 I’ve never liked the fact that Babe Ruth was included in an Orioles 50th anniversary set, chase card or not.  While Ruth did start his professional career with the International League’s Baltimore Orioles in 1914, he had absolutely no connection with the team we now call the Orioles.  When the Major League Orioles played their first game in 1954, Babe Ruth had been dead for over 5 years.

The cards themselves are glossy on both sides and are greener in color than they show up in these scans.  These five cards are all I have from the set, I got them at an Orioles Fan Fest a number of years ago.

I might pick up more of these, but while I consider myself an Orioles fan, I’ve only been one for 15 or so years, and I don’t have a huge emotional attachment to the Orioles that came before I started going to Camden Yards.  I appreciate them as players and individuals, but I don’t get all gushy thinking about them.

I’ll admit, I wouldn’t mind getting the Reggie Jackson card from this set just so I can have one card of Reggie with the Orioles.

I have to admit, as a Mets fan I’m jealous of sets like this… The number of regional or team-issued Mets sets are pretty small, and many of them are not the greatest.

I’d be curious to know if anybody out there bought these cards with the lottery ticket.  Did you win anything?