Over the weekend I was looking for cards to scan for yesterday’s post about minor league hockey and baseball, and that got me diving into my monster box that’s partially filled with older minor league sets. I had remembered that I recently saw an image of a 15-year-old R.A. Dickey card, and wanted to dig into the archives to see if I had it or not.

I was pretty sure I owned a copy, and was not wrong…

…This card no longer has to suffer in crowded conditions in the monster box;  it now luxuriates in the binder reserved for my player collections.

I also found several interesting cards from the same set, so I figured I’d share them with you…

This is the card that surprised me the most.

I could see that the card was of a player named Josh Hamilton, but I couldn’t believe it was THAT Josh Hamilton. Wouldn’t I have noticed long ago that I had a card of a noted slugger? And apparently I would not, because it is that Josh Hamilton, 18-years old and in his first season of pro ball after being selected with the first overall draft pick.

As long as I’m featuring Mr. Hamilton, I’ll just mention that the recent unpleasantness involving him and the Los Angeles Angels has caused me to lose quite a bit of respect for the ownership and front office of that team. I didn’t think much of them after the whole “Technically, ‘Anaheim’ doesn’t have to be in front of ‘Angels’! HA! Gotcha!” situation, and this did nothing to improve my opinion. Yes, Josh Hamilton fell off the wagon, but he also did not try to get away with it.  We shouldn’t even know about any of this, but someone leaked out the information and then the Angels organization got all bent out of shape when their own player did not get suspended.  “We are only looking out for what’s best for our $80 Million —- I’m sorry, I meant to say what’s best for Josh.”  I’m sure that every player in the Angels organization sleeps well at night knowing that ownership has their backs.

Cesar Izturis is no longer an active Major Leaguer, but he has been around enough that most of you should know who he is. (Been around, eh, been around? Nudge nudge, wink wink, say no MORE!) 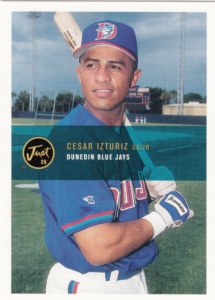 He looks a lot more mature than the 20-years-old he was at the time, doesn’t he?

Finally, here’s a particularly awful card of a current Met. It’s very hard to read the text or see the face, but trust me, it’s Michael Cuddyer. Whenever I’m going through these cards, I look at the backs rather than trying to read the gold print on a transparent colored background.

My suspicions for this set was that it looked fine while being designed on their computers, but then when it came back from the printer everybody said “Oh… That doesn’t look as good as I though it would”.

…Or maybe I’m just being generous.