This time of year, Football is always “Plan B” for me… I can’t get enthused about football until baseball is over for me…  But in this particular case I had something I was 90% done with and planning to post today, but last night I looked at it and said “Naaaaah… Don’t like it”.

As a fallback, I figured I’d share some 1960’s football cards got the last time I went to a show.

I’ll start with the oldest, from 1960 Topps Football.

John Nisby was a three-time Pro Bowler and one of the first African-American players on the Washington Redskins… in 1962.  I might be naive, but I had no idea that there were teams in any pro sport that hadn’t integrated by the 1960’s… Outside of the NHL, anyway.

As this is the first 1960 Topps Football card I own, I figured I’d share the back…

The “Football Funnies” became visible when you rub a coin over it.  It’s hard to see it on this card, so I’ll describe it for you…
Man in suit:  “So, you’re looking for a job.  Okay, I’ll pay you what you’re worth.”
Football player:  “Oh, no.  I won’t work that cheap.”

This next card is from the 1966 Philadelphia set, and I love this card.  Something about the pose and Clarence Childs’ expression. 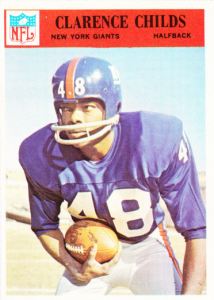 And look at that jersey!  It’s got SLEEVES!  Sleeves that come down over the elbow!  I love 1960’s football uniforms.

Childs played 4 years for the Giants and one for the Bears.  He’s listed as a halfback, but he also did kick and punt returns, as well as some defensive work.  He twice scored a touchdown on kickoff returns, including a 100-yard run on December 6, 1964.

The rest of these cards are from the 1967 Philadelphia Football set.

Gary Wood is wearing a Giants uniform and standing in Yankee Stadium, so it’s easy to overlook the relatively small line on  his card that says “NEW ORLEANS SAINTS”. 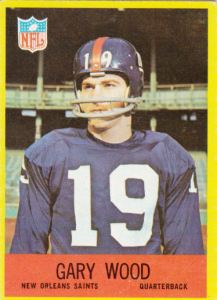 Wood was a quarterback who set numerous records when he played at Cornell.  With the Giants, he slotted as the #2 quarterback behind Y.A. Tittle and then Earl Morrall, but got a lot of playing time due to those quarterback’s injuries.  After time with the Saints, he returned to the Giants to back up Fran Tarkenton and hold the ball for kicker Pete Gogolak.

Carl “Spider” Lockhart was a two-time Pro Bowler who played 11 years for the Giants. 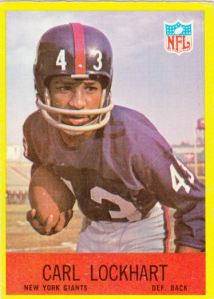 Spider ranks third on the Giants list of career interceptions (behind Emlen Tunnell and Jimmy Patton).

This next card features a great shot of Yankee Stadium…oh, and quarterback Tom Kennedy. 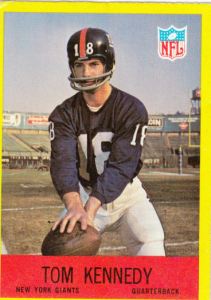 1966 was Kennedy’s only season in the NFL;  he played in six games and started one.  He joined the team mid-season as a backup to Gary Wood after Earl Morrall went down with a broken wrist.

Kennedy’s one start came in the game that set records for points scored in a game:  Redskins 72, Giants 41.  There’s a fantastic vintage film about this game over at NFL.com… And The Sky Rained Footballs.  This is absolutely worth the 2:40 you’ll spend watching it.  This is still a record for most points scored in a game by a team and by both teams.  Although none of the Giants on these Philadelphia cards are mentioned by name, all four of them appear in the film. 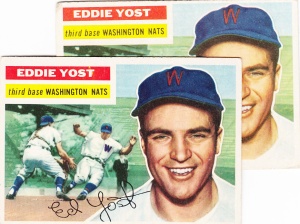 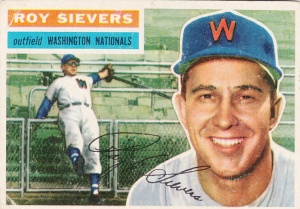 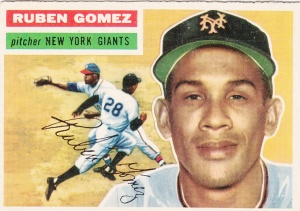 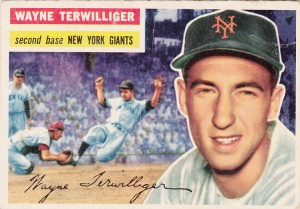 When COMC had it’s Black Friday promotion, I bought somewhere in the neighborhood of 150 cards.  I’ve shown a few cards here and there over the past few days, but this is the official kickoff of this particular round of “show and tell”.

I’ll start off the festivities with a trio of oversized cards, two of which feature Hall-of-Famers.

First off, we have a beeeeee-yoootiful 1955 Red Man Henry Thompson card. 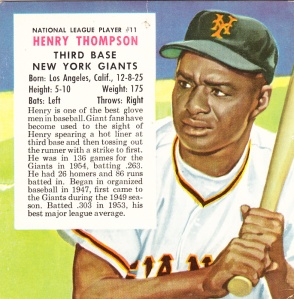 This card is in quite nice shape for a 58-year old card;  there’s a pinhole up in the corner of the box, the corners are slightly dinged, and the tab is missing from the bottom, but I don’t care about any of this.  I just see an awesome addition to my collection.

Slightly older and in worse shape is this Ralph Kiner: 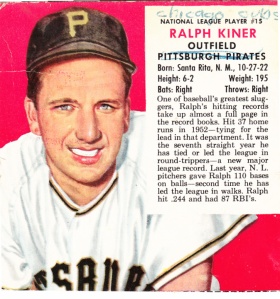 Yeah, the cards a little rougher, but he’s also a HOFer so you’ve got to have some give and take here.    As you can see, someone “updated” the card with a ball point pen.  What you can’t see is that some of the back has been torn away; it looks like this may have been pasted into someone’s album.  The actual artwork remains unblemished, which makes it more than nice enough for me.

Ralph Kiner went to the Cubs in a mid-season trade that involved 10 players and $150,000.  According to the Bureau of Labor Statistics’ Inflation Calculator, that’s equivalent to $1.3M in today’s dollars.  That’s a hell of a deal.

Moving forward to the 1960’s, we have another Hall-Of-Famer;  an affordable copy of this card has eluded me for years… 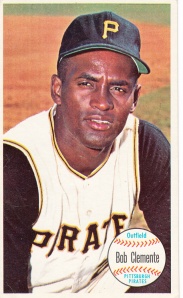 Yes indeed, it’s “Bob” Clemente.  It seems ridiculous now to think that “Roberto” was too exotic for the youth of America to process, but apparently it was.  You could make a good drinking game out of the number of times “Bob” is used on the back of the card. 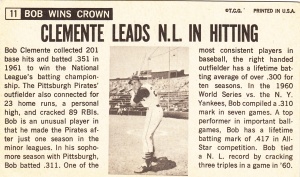 Now that I’ve got “Bob”, I need just 7 SP’s to complete the set…. Hah!  “Just 7 SP’s”.   Among the seven are Sandy Koufax and Willie Mays… it’ll be a challenge to finish this set off while staying within my budget, but we’ll see what happens.

This post has nothin’ to do with nothin’… Just like the last post, I’m trying something here, trying to figure out why this highly respected and much beloved blog will not appear in blogrolls. 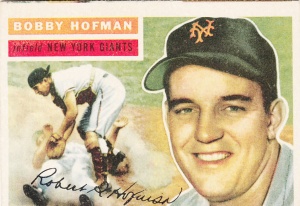 Bobby Hofman was a New York Giant who was used mainly as a pinch hitter and utility guy. I bought this at a recent show because it’s a cool 1956 common, and I like 1956 and I can afford commons.

Yesterday’s post was about America’s bicentennial in 1976.  Something else that happened in 1976 was the National League’s Centennial.  Several teams observed the Centennial in ways which people confused for observing the Bicentennial.

Of course, everybody knows the Pirates wore funny hats… 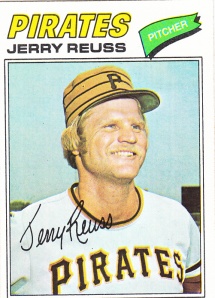 The Cardinals wore funny hats almost as much as the Pirates… 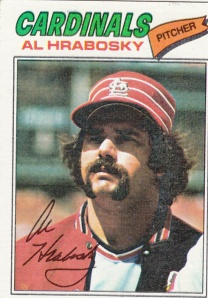 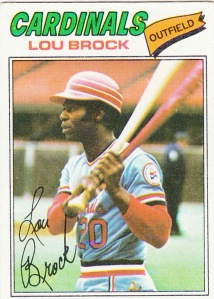 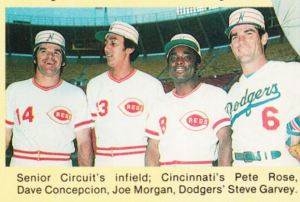 …The Mets wore funny hats (but not much, and the only image I could find in my collection was this shot from 1976’s Old Timers’ Day: This is Don Cardwell and Sal Maglie)… 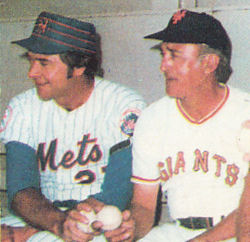 The Reds and Phillies and NL umpires also wore funny hats, but I couldn’t find any decent images of them.

…and every team, funny hat or no funny hat, wore a “National League Centennial” patch like Manny Mota has. 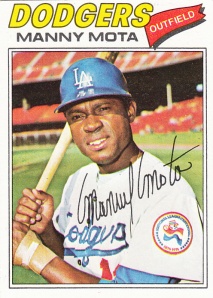 NOTE:  I posted this earlier today, and somehow it showed up as having been posted back in April.  Dunno why.  Not losing sleep over it.

Given that I’ve been actively collecting for nearly 40 years, one would think that I’d have some amazingly old cards.  One would be wrong.

For whatever reason, I’ve never been interested in pre-1950’s cards. 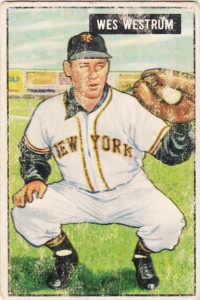 Out of the however-many thousands of cards I own, I’ve got only a handful of cards from before 1956, and this 1951 Bowman Wes Westrum is the oldest one of the bunch.

I wish I had some great story to tell, but the details behind this card are pretty mundane.  I ran across it at a show, it was cheap because of its condition, Wes Westrum once managed the Mets, and my mother had been a New York Giants fan (until they moved to San Francisco).  All that combined for a “What the heck” moment.

So unlike many of you out there, there are no vintage tobacco cards for me.  I think I might be able to keep myself occupied with cards from the last 60 years, anyway.

I’m using unrelated non-sports cards to accompany my predictions, because I don’t have any appropriate scans nor the time to scan anything.  Oh, sure, I could get images off another website, but where’s the fun in that? 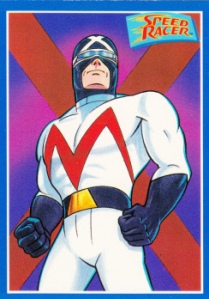 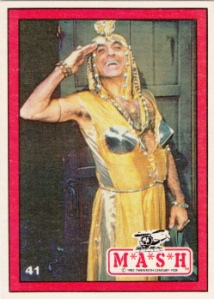 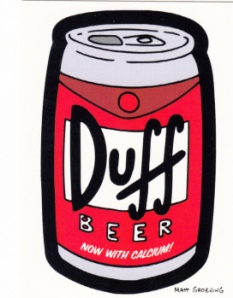 I thought it would be fun to share my predictions for this weekend’s playoff games while showing off the progress I’m making towards completing my 1975 Topps Football set.  I need 8 cards to finish off the set that I’ve been working on since… well, since 1975.  Yay, me.

Here are my predictions, along with scores determined through an extremely involved mathematical process (I’m pulling them out of my… uhhhhh  …out of a hat). 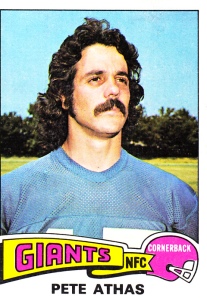 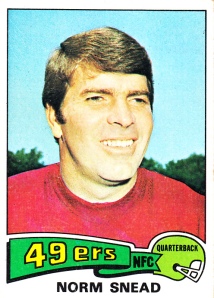 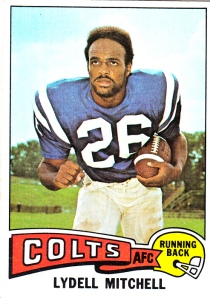 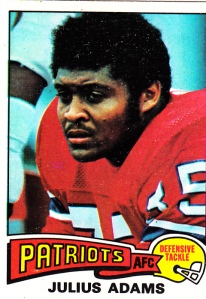 Yes, I’m predicting a rematch of Super Bowl XXXV.  Hopefully the Giants will beat the Ravens this time around.