You’re probably wondering what the point is of having different series within a virtual card set.  Well, to be honest, there isn’t much point…But I do it because I strive to make this virtual set everything that I wish an commercially-available card set would be.  Even though I started collecting in 1974 and just missed the boat on collecting sets that came in 5, 6 or 7 series, I still love the concept and would like to experience it someday.

Having artificial series also gives me a sort of breaking point to introduce new subsets, inserts and the like… Plus the opportunity to tweak the wrapper every six weeks. 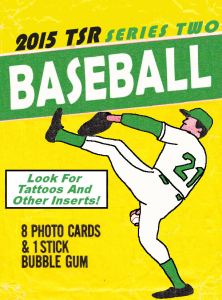 Just like the wrapper says, there will be some faux rub-on tattoos in this series, as well as some other new inserts… I’ll talk about them when I get there.

By a stroke of incredible fortune, nearly all of the cards that came in this pack just happened to involve players and events that have recently impacted my two MLB teams and my two Fantasy teams (points and Rotisserie).

On Sunday, the Orioles called up a promising rookie pitcher to start the game… and the new guy showed why people view him as promising. 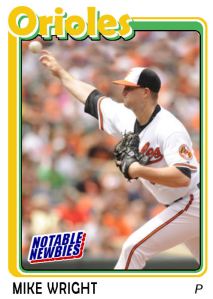 Mike Wright looked pretty darn impressive in getting the win in his debut.  He shut out the Angels through 7.1 innings, striking out six, walking none and giving up just four hits.  I ended up watching him pitch for a while rather than mow the lawn, and let me tell you, that is a major sacrifice on my part (nah, it really isn’t).

Although it wasn’t his debut, Mets pitcher Noah Syndergaard was also impressive on Sunday, giving up one run and three hits over six innings, on his way to his first MLB victory. 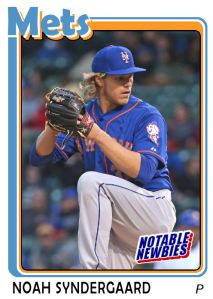 I recently saw… somewhere… somebody commenting on what the Blue Jays’s outlook would look like if they hadn’t traded away prospects like Syndergaard and Travis d’Arnaud and Jake Marisnick. Not that I have anything against the Jays, but its nice to hear that kind of talk about a team other than the Mets.

Up first is a faux rub-on tattoo… The idea for this came last September when Matt over at Heartbreaking Cards Of Staggering Genius busted a box of 1986 Topps Baseball Tattoos.  The tattoos from that set were appealing and colorful, but one thing that struck me about them is that they were simple.  “Well, shoot, I could do something like that”… at which point the tiny Barney Stinson in my head said “CHALLENGE ACCEPTED!”

So here’s the first one, featuring the Mets’ Matt Harvey. (The name and logo are backwards because it’s supposed to be a rub-on tattoo). 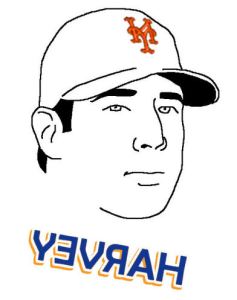 I don’t mean to pat myself on the back, but this turned out much better than I expected.  The artwork is more simple than you find with the 1986 Topps tattoos, and I’ll be frank:  calling it “artwork” is being generous, it’s really just my digitally tracing over a photo.

For the time being, I’m going to enjoy the way it looks… for a little while until I start to worry about whether I’ll be able to do as good of a job on the next one.

Since early in the season I’ve been meaning to feature the Astros… and why not? Given their loaded farm system and a few years of hard knocks, I fully expected the Astros to show improvement this year, perhaps be reasonably competitive… But I did not expect them to be in first place and 10+ games over .500 in mid-May.

The Astros had some lovely throwback uniforms to celebrate the 50th anniversary of the opening of the Astrodome, so I decided to kill two birds with one stone and introduce another new “insert”. 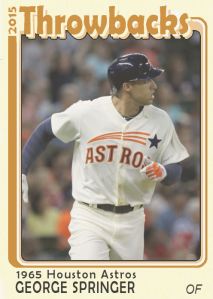 Trivia for you custom card nerds: The yellowing effect on this card was cloned from an actual 1968 Topps “Game” insert card I bought recently. It is authentic Topps yellowing! How can you not like that?

I also love these throwbacks uniforms… Frankly, I think they should use these everyday, but nobody ever asks for my input on these things.

Moving on from the inserts to “Joe’s Fantasy Corner”…. Earlier this month I picked up a pitcher on waivers, and that guy has payed immediate dividends for my floundering team… That guy being Shelby Miller of the Braves. 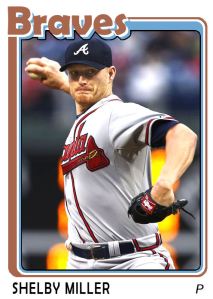 Since I added Miller, he’s thrown two shutouts and was one out away from throwing a no-hitter this past Sunday. What more could you ask of a guy who didn’t get drafted?

I’m hoping I get a similarly-outstanding results out of my latest acquisition, Delino DeShields. DeShields is a Rule V selection from the Astros (and if they weren’t doing well, they’d probably being saying “D’OH!!!!” about DeShields’ success so far) and he’s been doing quite well in Texas. 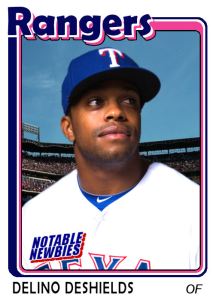 I’ve seen him referred to Delino Jr., but he’s got a different middle name than his father, so I don’t think that really makes him a “Junior”…

I’m going to gush over my own custom again… I like the way this one came out, because him looking up like that is very “vintage Topps”. The photo of Delino actually a “Photo Day” image, and I added the background of The Ballpark At Arlington.

Before I wrap up, I’d like to bring up another MLB happening from the beginning of the week…

As most of you know, the Marlins recently made an unconventional choice when they replaced their manager.  The word on the street was that they were going to hire someone who was inside the organization while still being an “outside the box” hire… 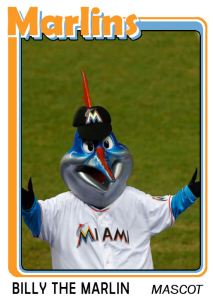 …But Billy The Marlin turned the position down, so they put GM Dan Jennings in the job instead.

Thanks, I’ll be here all week, you’ve been a great audience!

A lot of you consider Topps Update to be SSDW – “Same Stuff, Different Wrapper”.  For others it means updated base cards, different subsets and a couple of different inserts.

…And for bloggers, it means a day of not having to think about what to write… and that made the impromptu, hasty trip to Target completely worthwhile.

For those who haven’t seen these in the store yet, this is what the wrapper looks like. 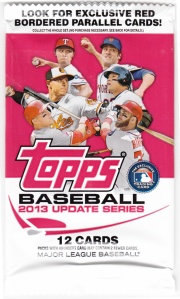 Unfortunately, Matt Harvey here is as close as I got to getting a Met, but I did get some Orioles. 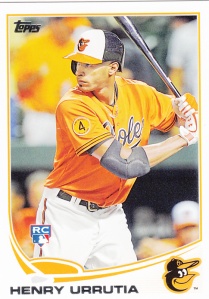 I’ve seen Urrutia play in AA, I’ve seen him play in the majors, and I’m still not sure how to pronounce his last name. Oo-roo-TEE-ah? Oo-ROO-tee-ah? I certainly can’t count on the Orioles announcers, who never met a Latino whose name they didn’t mangle. I tried going to LasMayores.com, the official Spanish-language MLB site, but my meager Spanish knowledge – thanks to a former co-worker I know more “bad words” than anything  – prevented me from navigating the site to find out if there should be accent marks over any part of his last name.

Along with rookie cards, we also have rookie debut cards, which allows Topps to get more Rookie Card logos in there… even though I wouldn’t think that anybody considers these to be rookie cards. 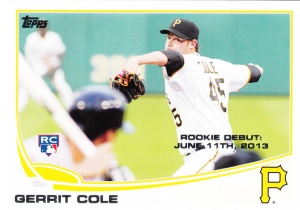 The “Rookie Debut” text looks black in this scan, but it’s silver foil.

A new insert also seems to focus on rookies… 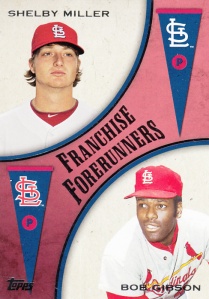 There’s also the usual cluttery subsets of All-Stars and Home Run Derby participants. This card confused me briefly because I didn’t see the All-Star logo on the card, but it gets lost in Darvish’s jersey. 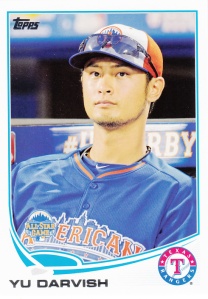 You may have heard that the Update series is introducing 1971 Minis rather than extending the 1972 minis of the regular set. 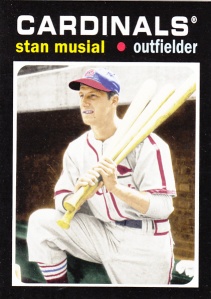 I will now officially declare that minis have jumped the shark.

…Out loud, but it’s OK because I was sitting in my car in the Target parking lot.

Something about these minis just diminishes the 1971 design, one of my favorite designs of the 1970’s… and when 1971 Topps are diminished, aren’t we all diminished a little bit?

One last thing I ran across in my packs — there are also traded players! 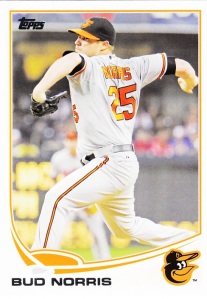 Remember when the set was called the “Traded” set?  Yeah, that was awesome…

So, yeah, that pretty much covers what I found.  I also got a couple of parallels, a “Chasing History” insert and a “Making Their Mark” insert, none of which I deemed worthy of scanning.

I’ll be buying more of this, but as is always the case with Topps Update, I’m really just looking for the base cards that do what the wrapper says they do – update the base set.  I want rookies I don’t already have, I want players in new uniforms. I can do without the clutter, except when its for a player I collect.