With a large amount of snow bearing down on us on the East Coast, I haven’t had a whole lot of time to write this post… And I’ll admit, I’m guilty of the thing many playoff teams get into, because I’ve also been looking past this post and more on the next post… I’m hoping I didn’t screw up my chances for the Blogosphere Championship.

As this is a “So THAT’S Where That Was” post, the cards here are all ones I’ve had for 30-40 years, but have been misplaced for much of that time.

The first card is a 1976 Topps “Welcome Back, Kotter” card that has been separated from its packmates for lo these 40 years.

Appropriate for the recent Star Wars hype… Here’s a 1980 Burger King “The Empire Strikes Back” card, showing the Millenium Falcon being pursued by an Imperial Starcruiser (if I remember my Star Wars lingo).

Me, I thought the Star Wars movies were fun, but I’ve always been a Trekkie at heart.  I don’t remember getting this card, and I never really went to Burger King a whole lot, but there was one within walking distance (just barely) of my high school, so I’m guessing this was an after-school acquisition.

This next card is clearly well-loved… It’s from the 1975 McDonald’s Quarter Back set, but it’s actually only half of the original card. One half – this half – featured an NFL quarterback, and the other half was a coupon for 25 cents off of a Big Mac, large fries and large drink… you use the coupon to get a quarter back! ARR ARR ARR!!! Humor!

Funny to think of it now… Oooh, a whole quarter!  I ran 25 cents through the Bureau of Labor Statistics’ Inflation calculator, and they say that it would be worth about $1.10 today, so I guess that’s a decent amount.

Here’s the crumpled back of the quarterback:

Wrapping up with a 1976 MSA disk of Rick Monday. Unlicensed never looked so good!

…Another installment in the “So THAT’S Where That Was!” Series…

When I first got into baseball and baseball cards – and for me, they were simultaneous occurrences – I was the proverbial sponge.  One of my favorite books at the time was a large hardcover book called “The Story Of Baseball”. It covered the sport from it’s beginnings through 1973, and I learned a lot about the sports early days from that book.

I also learned a fair amount from a card set that I now realize was my first oddball set:  1975 Fleer Pioneers Of Baseball.

Pioneers of Baseball is a small set of slightly oversized cards, each featuring a notable figure from baseball in the 19th century and early 20th century. There are 28 cards in the set, and while the cards are standard width, they’re a half-inch taller than standard… Just big enough to be a problem.

The fact that they were just slightly larger than standard was part of the reason mine were misplaced for 20-30 years… I put them in a particular box because I didn’t know what else to do with them, and over the years I forgot about that box.

My scanner makes the cards seem a little lighter than they really are… The borders look sort of bronze in the scans, but they’re closer to milk chocolate in color.

The backs of the card featured a write-up on the “Pioneer’s” career. 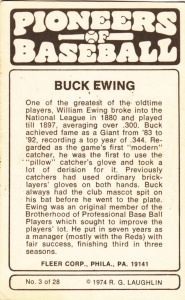 These cards were part of a long-running mystery for me. Being that they were in my collection from very early on, I knew I wouldn’t have gotten rid of them… And yet I had no freakin’ clue where they were.  I had faith that they’d show up sooner or later, but in terms of organizing my collection, it ended up being more “later” than “sooner”.

…But with one mystery solved, another one presented itself.  When I was researching the set for this post, everything I saw indicated that they came in a pack that was marketed as “Baseball Patches”, and each pack contained one team pennant cloth sticker and one Pioneers card. The thing is, while I remember having these cards, I do not remember getting these cards,  nor do I remember any of my friends having any.  Neither the “Baseball Patches” wrapper nor the cloth stickers look all that familiar to me.  If your curious about the box, wrappers and stickers, you can see them over at The Fleer Sticker Project.

I wonder if these cards might have been sold in different packaging after the fact (i.e. several cards in a pack, without a sticker), or maybe in some sort of repackaging… it did happen sometimes with unsold cards in the 1970’s, but it wasn’t like the repacks of today… it was more like “let’s repackage the unsold stuff in our warehouse and call them Baseball Fun Packs!”.

Now that I’ve found these cards, I see that they fit pretty nicely in 6-pocket sheets, like you’d use for “Tall Boy” cards (or, in my case, 1961 Topps Sports Cars).  I’m thinking I might use this opportunity to do a bit of reorganizing and create a “1970’s Oddballs” binder for this set, Kellogg’s, Hostess, Topps Supers and the like.

The funny thing about this set — for me, anyway — is that even though it was one of the earliest sets I collected, I don’t love it.  It has a lot of significance for me, the photos are interesting and I like it OK… but even though I’ve got 19 of the 28 cards, I didn’t instantly think “Oh, I HAVE TO finish this set.”

…And it’s not that I wouldn’t make an effort to complete this set, more that it’s such a low priority in the grand scheme of things that the needed cards would pretty much have to fall into my lap.

I guess it all comes down to my gradually losing interest in the history of baseball prior to the Expansion Era.  I suspect that a large part of that comes from the tendency among National League fans in the New York area (I grew up on Long Island) is to compartmentalize the history of the game a bit… One doesn’t like to talk about the love that left them, only about the one in their life now.

Regardless of how I feel, it’s certainly an unusual set, and it fits pretty much any definition you might have of “oddball”.

Does anybody else have any of these cards?

Does anybody remember buying these in the 1970’s?

It started the way most of these discoveries go.  I was looking for one thing and found another.

Over the weekend I was looking for a particular collectible and I was pretty sure I remembered which box it was in… but where was that box?

I looked in the one closet and didn’t see the box I was looking for, but there was another box that I’d managed to ignore for years, and I looked at it and could not for the life of me remember what it contained.

So I pull it off the shelf and open it up… Some of my artwork from school, old papers, various tchotchkes… and a metal index card box.  I remembered having the box, but I didn’t remember what I’d used it for.

I tilted the lid open and the heavenly host began to sing, because carefully placed in there were a number of non-standard-sized vintage cards and oddballs that all fell into the category of “I knew I still had these around somewhere! I knew it!”  I’ll share the rest of these cards in the future, but for today it’s all about the two oldest cards.

I hadn’t seen these cards in such a long time – it’s probably been somewhere over 20 years – that I had started to question whether I had merely imagined owning them.

First up is a very creased and well-loved 1952 Topps card of Hank Thompson of the New York Giants. 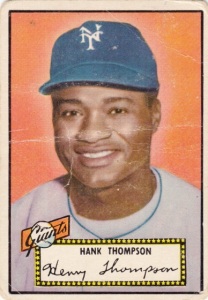 Hank Thompson was one of the first African-Americans in the Majors, playing part of a season with the St. Louis Browns in 1947.  He would go back to the Kansas City Monarchs (his Negro League team) for a year, and then would spend the rest of his career with the Giants.

Interestingly enough, he got MVP votes in two different years, but was never an All-Star.

The other card was another badly creased card, a 1955 Bowman Art Houtteman.

Houtteman pitched mainly for the Tigers and Indians, although he had a short stint with the Orioles.  His career year was 1950 when he went 19-12, lead the league with 4 shutouts and was an All-Star.

These two cards came to me as part of a handful of poor condition cards given to me by a friend of the family.  I was something like 11 or 12 at the time, and this was an amazing windfall to receive cards as old as these were… even at the time, the 1952 was somewhere around 25 years old.

So, anyway, there are two more cards to cross off the “I need to find those someday” list.