True confessions:  I’m not really much of a Stadium Club guy.

I like the cards just fine, but the value’s not there for me.  They cost – what? – a little more than twice as much per card as regular Topps?  The thing is, I don’t like them twice as much.  Sure they’re nice, they often have nice photography and are glossy glossy… but I don’t see them as being twice as nice. As a result, I generally don’t buy many packs.

Let me put it this way… Only once have I ever bought a wax box of Stadium Club.  It was a box of these…

…And I bought it earlier this year.

I keep a couple of packs in my car for when I need a pack-bustin’ fix during the work day.

But this week at work has been… Well…. Let’s just say that it’s been a bit short on stimulation and fulfillment.  I needed something a little more exciting than 23-year-old packs… even if those 23-year-old packs contained “SUPER PREMIUM PICTURE CARDS”.

So, off to Target I went.  I bought a repack (which I’ll tell you about in a few days) and I bought this:

What the heck, y’know?  See what the excitement’s about.

It’s a loose pack from Target, I’m sure the pack feelers have already been and gone, but we’ll see what happens. 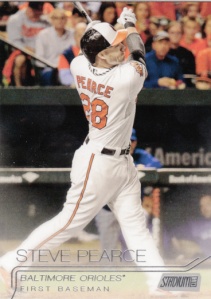 Sweet!  An Oriole I would’ve been looking for anyway.  Steve Pearce made a nice catch yesterday in Boston, one that clearly irritated David Ortiz (who’d hit the ball).  Anything which annoys Big Papi is worthwhile in my book.

The card design – such as it is – is OK, but it most likely will fail my “can I read it while it’s in a binder?” test.

The backs are pretty nice.

Oswaldo Arcia does an impression of the Salt Vampire from the original Star Trek.

Tanner Ro-ark of the Nationals (at least that’s how the Nats broadcasters say it).

Down at the bottom of the card, where they’ve got the photo sort of faded out, it looks sort of like he’s got his pants hiked up and not wearing any socks.

Justin Morneau of the Rockies… something I’m still not quite used to.

George Brett, and he’s surrounded by The Ood.  (Hey, as long as I’m making nerdy references…)

I had more fun with the repack.

Unless one of these cards is a short print, that’s not much return for $3.  And this is why I don’t buy packs of Stadium Club.  But what the heck, it served it’s purpose and gave me a little bit of fun after a less-than-fun day.