The last couple of weeks have been really busy for me, at least from a cardboard (and virtual cardboard) standpoint.  I’ve been so busy with COMC, custom cards and other things that I’ve been relying on my backlog of finished drafts to keep The Shlabotnik Report on a daily basis.  I’ve gone through most of my finished drafts, so today you get a number of scattered thoughts posing as a cohesive post…

Yesterday I bought a Topps Update blaster from Toys R Us, assuming that it would be priced similarly to the same blaster at Target. WRONG-O!  $26 + tax for 80 cards plus a manupatch. I should’ve been suspicious of the fact that the blaster box didn’t have a price printed on it.  I’m thinking it’s going to be a return, unless someone call tell me some amazing reason for keeping the blaster…. The manupatch doesn’t count, it would just get added to my “Going to COMC” box.

Former Dodgers/Cubs/Jays/A’s/Yankees/Expos pitcher Ted Lilly retired, and I’m a little bummed… Not because I’m a fan, but whenever I’d hear him mentioned, in my mind I’d sing “A song of love is a sad song… Ted Lilly, Ted Lilly, Ted Lo…” 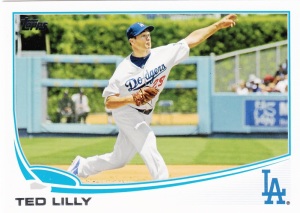 …and yes, most of you wouldn’t get a reference to “Hi-Lili, Hi-Lo”, but I’ve never shied away from making arcane references before, I’m not stopping now.

Ted Lilly’s full name is Theodore Roosevelt Lilly.  Topps needs to go back to putting full names on the backs of cards.

If it’s your misfortune to ever listen to the Yankees on the radio, you may be happy to know that you’ll never again have to hear John Sterling say “The Grandyman can” or “Robbie Cano, don’tcha know”.  I realize they’ll be replaced by some equally inane catchphrases for the new Yankees, but let’s not go there just yet.

Does anybody else find this amusing?  Phoenix has had two major hockey teams over the years — the Coyotes and the Roadrunners (WHA).

I found myself staring at this recent page from my Baseball HOF calendar:

While absentmindedly staring at this image, several thoughts ran though my head…

For all his acclaim, I find pianist Glenn Gould’s music to be technically proficient but severely lacking in emotional depth.

I’ve only seen two episodes, but so far “Almost Human” is a surprisingly good show.

OK, that pretty much covers me. Does anybody have anything they’d like to get off their chest?

Update #1 – I somehow turned off the comments on this post… Sorry about that.  I think we’re good now.

Update #2 – During the process of trying to figure out how to turn the comments back on, I realized that this is post #700.  Woohoo!