Ted Sizemore… was the 1969 NL Rookie Of The Year with the Dodgers and played 12 seasons with the Bums, Cardinals, Phillies, Cubs and Red Sox.  He was originally drafted as a catcher, and during his MLB career, Sizemore played every position but pitcher and first base.

After his playing days, he was a senior executive with Rawlings Sporting Goods, and in the early 1990’s was considered for the position of National League president.

In 1976, Ted Sizemore… was traded back to the Dodgers early in March, and got a decent amount of playing time due to a sub-par season from Davey Lopes.

So… take your time… and tell me… Is it Shea?  I think that blurry thing in the upper left corner is the scoreboard at Shea.  By the way, I’m going to change the “Is it Shea” into a running count of Shea and non-Shea cards, just as soon as I get a chance to total up the cards I’ve already posted. 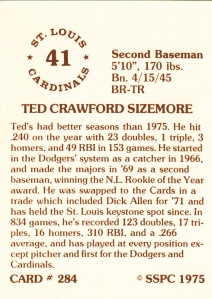 Ted Sizemore getting a single for the Cubs in 1979: