At the beginning of the week I was talking to my friend Frieda, who’s a Braves fan. Forgetting who was playing who after the wild card games, I said that the only matchup that could result in my rooting for the Braves was if they’d played the Dodgers. As a kid in the 1970’s I took a general dislike to the Dodgers, and I’ve never completely let that go.

Frieda said, “The Braves do play the Dodgers on Thursday, so are you going to root for the Braves?”

The rivalry hasn’t been much over the past 5 years, the Braves aren’t AMERICA’S TEAM! anymore, and Chipper’s gone, so I grudgingly said I would try… although I’d still be rooting for the winner to get no further than the NLDS.

So I happened to have the beginning of the game on last night. The foam tomahawks came out, the extremely obnoxious chanting started, and that was as much as I could take. Sorry, Frieda.

So my more realistic assessment of the series is that I hope it’s a high-scoring, extra-innings 5-game affair that will leave the winner worn out for the NLCS.

…and I feel a strong need to cleanse the palate… 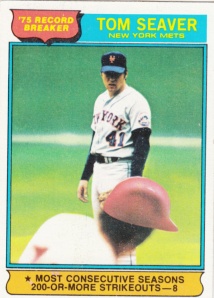