Today we’re going to discuss one chapter in the history of one of the oldest continuously-running pro basketball teams, a team that – I believe – has played home games in more cities than any other franchise in North America. Today we’re covering the Kansas City-Omaha Kings of the NBA.

The team currently known as the Sacramento Kings has it’s origins in Rochester, N.Y. in 1923… more than 20 years before the NBA was established. The team was known as the Rochester Royals when the were one of the charter members of the NBA, and would move to Cincinnati in 1957. The Cincinnati Royals would play for 14 years before attendance woes forced them to look for another home.

Two moves that could not have helped attendance in Cincinnati was trading Jerry Lucas to San Francisco and Oscar Robertson to Milwaukee. Both of these players pass an important test of basketball significance in that I, someone who cares little about basketball, am familiar with both of them.

One of possible targets for relocation of the Cincinnati Royals was San Diego, which had lost the Rockets to Houston in 1971. However, it was decided to move the team to Kansas City, while also playing some of the home games in Omaha and St. Louis. This was not a new business plan for the team, as some of their Cincinnati home dates were played in Cleveland, Columbus and Dayton. St. Louis fell out of the equation somewhere along the line, but Omaha stayed a second home for the team for several years. 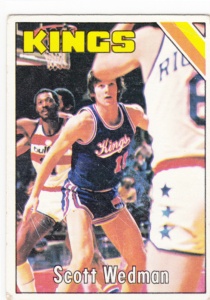 One of the ramifications of moving to Kansas City was the team name… They could not keep the name “Royals” because of the baseball team of the same name, but they maintained an air of regality and officially changed their name to the Kansas City-Omaha Kings.

The number of games played in Omaha decreased over the next few years, and the team was rechristened the Kansas City Kings. They would continue to play a few games in Omaha for a couple of years, but the newly-constructed Kemper Arena was their home for the most part.

In June of 1979, a severe storm caused the roof of the Kemper Arena to collapse, and rather than play in a substandard facility while the arena was rebuilt, the team investigated moving to cities such as Minneapolis or Dallas. Concessions were made, and the team stayed in Kansas City.

Ultimately, attendance and poor luck resulted in the team being sold and relocated to Sacramento for the 1985-86 season.

The Kansas City Kings have had a number of notable players during their tenure, but the most recognizable name (to me, anyway) is Hall Of Famer Nate “Tiny” Archibald.

Tiny Archibald was drafted by the Cincinnati Royals and played for the franchise until being traded to the Nets in 1976. In the 1972/73 season, he lead the league in both scoring and assists, something nobody else has ever done.

During thirteen years in Kansas City, the team finished with a winning record just four times. The deepest the team got into the playoffs came in 1980-81 when they lost the conference finals to the Rockets in 5 games… and that 1980-81 team had finished the regular season with a 40-42 record.

Tiny Archibald is one of just two Kansas City Kings to have his number retired by the franchise (the other was Sam Lacey).

In researching this, I found out that “Nate Archibald” is also a character in the “Gossip Girl” books and TV series.

The Sacramento Kings have been stable for a relatively long time, but there are rumors of another move (possibly to Seattle) swirling around the team.

Meanwhile, Kansas City has not had another NBA team since the Kings left town.