Like pretty much everybody else, I was shocked and stunned when the word got out that the Atlanta Braves would be leaving not-yet-legal-drinking-age-if-it-were-a-person Turner Field for a new ballpark constructed specifically for them in Cobb County, north of the city of Atlanta.

From a sheer business standpoint, it’s a no-brainer.  Your lease is coming up, someone’s gonna give you a far better deal, you jump at it.

From a more subjective standpoint, this seems kind of shifty somehow.  Of course, as a Mets fan, I don’t need any encouragement towards thinking that the Braves are pond scum.

I also wonder what this will do to the Braves attendance.  On the website dedicated to this project, they’ve got a “blood spatter” map that shows that the new ballpark is in the heart of Braves country, at least when you consider where the people buying tickets are located… but that’s where the ticket buyers live.  The real question is “Where are they coming from when they go to games?”   How many of them go to weeknight games from work, and how many work in Atlanta? 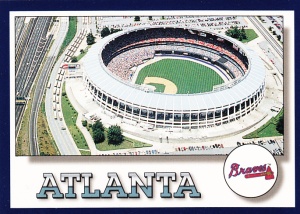 I know this isn’t Turner Field, but all of my Braves “stadium” cards feature Fulton County Stadium.

As someone who follows minor league baseball in terms of both prospects and the business thereof, the other thing that sprung to  mind is the plight of the AAA Gwinnett Braves.

The Braves talked up a good game when they moved their AAA team to a different Atlanta suburb from the one they’re moving the big team to.  It sounded great on paper… Putting a minor league team into a market where they have an instant fan base.  The Brooklyn Cyclones do great in the Mets’ backyard… The Lehigh Valley IronPigs and Reading Fightin’ Phils do extremely well in the shadow of Philadelphia, as do the Frisco Roughriders in suburban Dallas/Ft. Worth.

But check out the average attendance figures for the G-Braves since they moved to Gwinnett County:

…So in 5 seasons in suburban Atlanta, the G-Braves have never averaged 6,000 fans per game, and have never finished higher than 12th in the league in average attendance or 20th in AAA.  I know there are probably several dozen reasons why it doesn’t apply to the Major League club, but it does makes me wonder.

I  do hope that this is a bad move for the Braves, because the fewer chanting, foam tomahawk-waving zombies there are, the better.

At any rate, it’s all good for the Atlanta Braves, because in their new ballpark they’ll be rockin’ the suburbs…

A message to readers of The Shlabotnik Report: I’ve noticed that many of the blogrolls show my most recent post as being from this past Friday, but as you may have noticed, that is decidedly not the case.

Please be aware that I publish every day, usually around 7am EST, so if I’m not showing up on the blogroll of your choice, please don’t think that I’ve abandoned you.

2 thoughts on “Rockin’ The Suburbs”