1970’s Highlights:
Threw two one-hitters with the Mets, with each hit by a future HOFer; in 1970 he one-hit the Cubs with the only hit coming on an Ernie Banks single in the 8th; In 1971 he one-hit the Pirates with Roberto Clemente hitting a run-scoring triple in the 6th; After being acquired in an offseason trade involving Félix Millan, Danny Frisella and George Stone, Gentry was the Braves Opening Day Starter, 1973; Injuries kept him from living up to the promise of his 1969 rookie season and college dominance

Career Highlights:
Was with the 1969 “Miracle Mets” and was the winning pitcher over Jim Palmer in Game 3 of the World Series, pitching 6.2 shutout innings and hitting a 2-run double; As a college pitcher in 1967, The Sporting News named Gentry the National Player of the Year after he struck out 229 batters (then a record), finished with a 17-1 record and a 1.14 ERA. In that year’s College World Series he pitched 23 innings over 2 starts, striking out 31 and giving up just 2 runs; Gentry has been inducted into the Arizona State and NCAA baseball Halls of Fame; Pitched a shutout against the Cardinals to clinch the NL East in 1969

Fun Stuff:
Was a college teammate of Larry Gura

Card Stuff:
Thanks to an article about Topps Cards in Dynamite Magazine, this 1973 card of Gentry was my introduction to the concept of Topps modifying an image (and a pretty decent job of it, too)

1970’s Highlights:
César Gerónimo, known for his glove and strong throwing arm, was the starting center fielder on the Big Red Machine teams of the 1970’s; He won four Gold Gloves from 1974 to 1977, played in 3 World Series and won World Championships in 1975 and 1976; Came to the Reds in the same 8-player deal which brought Joe Morgan and Jack Billingham from Houston

Career Highlights:
Inducted into Reds Hall of Fame in 2008

Fun Stuff:
Gerónimo was the victim of Bob Gibson’s 3000th strikeout in 1974 and would also be Ryan’s 3000th K in 1980;  Was originally in the Yankees organization until the Astros selected him in the 1968 Rule V Draft 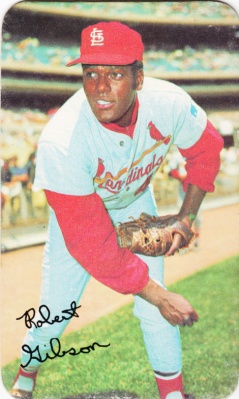 Fun Stuff:
A basketball start at Creighton University, Gibson played for the Harlem Globetrotters in the winter of 1957/58

1970’s Highlights:
Lead the league with 30 saves in 1970; Was named the 1971 NL Fireman of the Year by The Sporting News; Had 20 or more Saves in 4 straight seasons; Made the last pitch at Forbes Field 6/28/70; Got Cy Young votes in four seasons and MVP votes in two seasons

Career Highlights:
Won 15 games with the Astros in 1966; On August 21, 1966 Giusti drove in 6 runs and hurled a shutout in an 11-0 whitewashing of the Reds. The best part is that all six RBI came on a pair of two-out, bases loaded doubles, both times scoring Rusty Staub, Bob Aspromonte and Ron Brand

His 1969 Season With St. Louis Deserves It’s Own Category:
The Cardinals acquired Giusti from the Astros in an October 1968 4-player trade, and then 3 days later they lost him to the Padres in the expansion draft. That December the Cardinals sent 4 players to San Diego to get Giusti back; Giusti’s 1969 Topps card lists him with the Padres on the front, shows him in an Astros uniform with the cap log blacked out and makes note of the trade back to St. Louis on the back of the card; The one nationally-issued card which shows Giusti in a Cardinals uniform is a 1989 Swell Baseball Greats card

Career Highlights:
Pitched in the postseason with the 1981 Dodgers and 1982 Angels

Fun Stuff:
Was the last Twins pitcher to bat before the implementation of the DH in 1973; Was the 8th native Minnesotan to play for the Twins