It’s all about flexibility.

That’s what I was thinking when I was reading last week’s Night Owl Cards post about the irons he currently has in the fire. Some of the commenters suggested the topic become a “Blog Bat-Around”, and I said “Challenge accepted!”… although I’m not sure that anybody else has actually done this. No matter, I shall forge ahead!

I always have multiple projects going on, mainly because have numerous interests when it comes to my collection.  I’ll also confess to having a short attention span.

But when it all comes down to it, the go-to excuse I use is “flexibility”.

The card shows nearest to my home in Shlabotsylvania involve a 2+ hour drive, so I only get to one or two a year.  Because of of the paucity of show opportunities, I feel I can’t and shouldn’t limit things to one goal.  However, the last time I went to a show I went in with a primary goal of chasing after 1977-78 Topps Hockey, a set I started as a kid and have been giving thought to completing.

Then I got to the show – a regional show with several hundred tables – and found very little 1970’s hockey. Vintage hockey? Sure. Current hockey? Multiple dealers. 1970’s hockey? Too bad, so sad.

As a result, what had been my primary goal of the day quickly resulted in me standing in a show aisle saying “Well, poo…” (In the manliest way possible, I assure you).

That same show is rolling around in early April and I want to be ready for several possible contingencies, so I thought this post topic would allow me to contemplate just what it is that’s floating my cardboard boat right now.

Opening Current Packs
I completely understand that buying packs of current sets is a non-cost-effective way of collecting, but I’ve done it all my life, I enjoy picking up packs whenever I go into Target (and still miss when drug stores and convenience stores sold them as well) and I’m not stopping now.

It’s not even about chasing sets, because I have no illusions of completing 2018 Topps or Heritage. It’s more about having fun, acquiring cards of new players and getting a head start on my various projects involving 2018 cards.

Unfortunately in Shlabotsylvania (and, I’m guessing, elsewhere), retail Heritage is already drying up just weeks after the release. Sometimes this hobby just tries my patience.

1957 Topps Orioles Team Set
Last year, CommishBob of the must-read Five Tool Collector filled me with delight and astonishment when he sent me a Brooks Robinson rookie card, this lovely example from 1957. 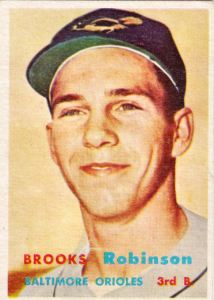 Once the state of shock wore off, I decided that it would be fun to go after the team set. At that point I only had a couple, but I put a dent in it the last time, and will pursue this further at the April card show.

1966 Topps Mets Team set
This one is a “just in case things fall into place” project.

I thought this would be a relatively easy team set to complete. The Mets loaded up on past-their-prime future HOFers in the early years. Young future HOFers would come starting with Tom Seaver in 1967 and Nolan Ryan in 1968. 1966 Topps falls in a sweet spot between the two. The big names in the team set are Tug McGraw, Ron Hunt, Ken Boyer and Ed Kranepool. Sounds like an achievable goal for a collector on a budget, right?

That’s when I found that there seems to be an… ahhh, let’s say *unusual* shortage of several of the high-numbered commons such as Lou Klimchock. For example, I can go out on COMC and get nice-enough copies of hi #’s like Dick Bertell, Andre Rogers or John Sullivan for under $8. Lou Klimchock? Not a single one out there… and it doesn’t seem like there are any bargains to be found on eBay.  I’m going to keep my eye out for the three cards I need, but I won’t get my hopes up.

1979 Topps
I’ll admit, the enthusiasm isn’t really there for this project… but I need fewer than 50 cards to finish off the 1979 Topps set, and all of them are minor stars and commons.

1979 Topps is my least-favorite set of the decade, so I have to admit this is not so much a passion project as it is an “I’m out of excuses” project.  Besides, when I finish this I’ll extend my run of complete Topps sets from 1973 to 1981.

1976 SSPC
This goal’s a little dicey because I rarely find a lot of SSPC at shows. 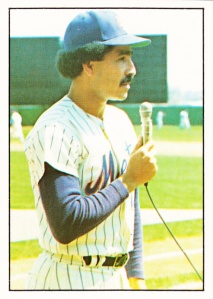 One thing working against me is that I have only a couple of Yankees and Phillies, and an argument can be made that I should just try and buy those team sets on eBay… but I can’t decided how I want to procede on those.

1961 Topps Sports Cars
I love this non-sport set, and giggle like a child when I pick up new cards, but because it’s a small set and the only non-sports I’m chasing to any degree,  if it’s not right in front of me it tends to get forgotten.

I’m just over halfway to completion, I should ramp this one up.

1970, 1971 and 1972 Topps
These are sets I’ve had a long-term non-goal of having fun with and accumulating as many as possible without actually committing to completing the sets. 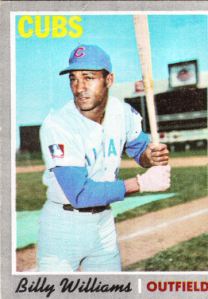 I’ve made efforts to break the sets down into smaller goals, like chasing down all of the Expos from these three sets.

I’ve also tried sub-goals like trying to complete the lower series… For example, I’ve got all of the 1972 commons through the 5th series…  6th and 7th are a different matter.

1969 High #’ed Cards For The Expansion Teams
Why the expansion teams?  There’s something I love about players shown wearing what was, at the time, a brand spanking new uniform. 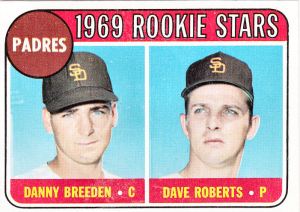 Why high numbers?  Because that love doesn’t spread to tightly-cropped photos of capless guys in California Angels jerseys.

14 thoughts on “Bat-Around (Or Is It?): My Various Projects”